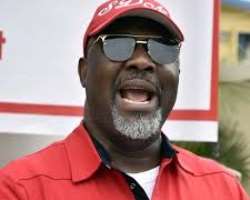 Senator Dino Melaye came to national reckoning in 2007 as a member of the Federal House of Representatives during the impeachment of the nation’s first female Speaker, Hon. Patricia Olubunmi Etteh. He was part of the integrity group which included Patrick Obahiagbon that campaigned for and brought Dimeji Saburi Bankole to power as the house’s speaker. This cemented his clout as a power broker and he soared since then.

He suddenly found himself out of power and immediately metamorphosed into a human rights activist. We remember his role in the 2012 anti-subsidy protests which greatly shook the firmament of the then Good luck Ebele Jonathan led administration.

He later found his way to the red chamber and immediately became an ally of the Senate President, Bukola Saraki as both men defected from the Peoples Democratic Party (PDP) to the All Progressive Congress (APC).

He sponsored quite a number of bills and was quite vocal in the upper floor of the legislative chamber. As time went on, he became quite arrogant and had a public spat with Senator Oluremi Tinubu, the former First Lady of Lagos State and wife of the APC National Leader, Asiwaju Bola Ahmed Tinubu. He was quoted to have said that he will beat her up on the senate floor and later impregnate her. This drew widespread condemnation from the bewildered members of the public but he didn’t tender an apology. He even went as far as taking a walk on the street of Bourdillon where Bola Tinubu lives and dared him to attack him.

Last year saw a swift change of fortune for the lawmaker as he lost the re-run to his arch rival and former President of the National Union of Journalists, Senator Smart Adeyemi who thrashed him at the polls. He indicated his desire to appeal the court judgement and then proceeded to reinvent himself as an actor while he waited for the court to decide his fate.

He once granted an interview where he said that he was both talented in acting and politicking and he will fall back to the former now that he is out of power.

He starred in a well publicized movie titled ‘Crescent’ which was shot to raise awareness about the travails of sickle cell sufferers in the country. It was premiered in Abuja and the Silverbird cinema in Lagos. He was also featured in another movie known as ‘Lemonade’ where he played the role of the ‘Distinguished Senator’. Joy Idoko was the producer of the movie and she claimed in an interview that it was well received by the members of the public. He will also be starring in a televisions eries titled ‘Equity Unbound.’

We are glad that the former Kogi West Senator has discovered another side of him which will not have shown forth if not for his surprising electoral loss. We are joyous that he is a living testimony of finding prosperity in adversity. This is a lesson to all Nigerian politicians to have a day job or something to fall back on so that they don’t end up like fishes out of water when their political romance comes to an end. Politics shouldn’t be a do or die affair; it is instructive to note that the controversial senator never called his supporters to engage in acts of violence after his loss which is highly commendable in a clime where election losers behave like spoilt children whose candy has been suddenly taken away from them.

I have not watched any of his movies and so I am not in a position to judge whether he is really talented or not. I am also surprised that he didn’t upload any of his movies or talk about them on his social media handles. Is he shy or something? He loves flaunting his personal life there especially his fleet of exotic cars which leaves one green with envy and so why the exception to his new found profession? Only him can really answer that question or maybe he is now more mature in exposing less of his private life there.

His romance with Nollywood dates back to when he was accused of putting popular Yoruba actress, Bisi Ibidapo-Obe in the family way – an accusation he vehemently denied. We are curious as to whether this recent entry into the entertainment scene is just a stop gap till when he is hopefully restored back to the red chamber by the court or its truly a transition from politics to entertainment. Will his face be marketable to the cabal that controls the movie distribution in Alaba and Upper Iweka? Will he resonate well with the public given the bad impression his countrymen have about politicians who they see as being responsible for their daily woes? Will he get bored and move on to something else? We recall that when he was out of power in 2011 he immediately became a human rights activist. Will the producers be able to afford his fees as the former senator can boast of assets running into billions of naira? Will he waive that aside and just do it for the fun and the need for relevance since his political days may be over no thanks to his falling out with the powers that be both in Abuja and in his native Kogi state?

Time will definitely give an answer to the above nagging questions. For now we wish the ‘Ajekun Iya’ crooner the best of luck in his newly chosen profession and hope he soars to the apogee in it.