Says "Honour should be our code."
By The Nigeria Voice 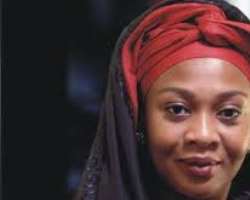 The Minister of State for Transportation, Senator Gbemisola Saraki, has lashed the Kwara State Governor, AbdulRahman AbdulRazaq, for what she termed the violent demolition of Ile Arugbo (Home for the aged), a property developed by her late father and former Senate Leader in the Second Republic, Dr. Abubakar Olusola Saraki.

In a statement on Friday, Saraki, who is a member of the All Progressives Congress like AbdulRazaq, condemned the violent manner in which the demolition was carried out, calling on the Inspector General of Police, Mohammed Adamu, to call to order the Kwara State Commissioner of Police, Kayode Egbetokun.

She said the level of force deployed by the police against the aged women at the home was deplorable, adding that the demolition was driven by envy and motivated by jealousy.

She said: “We must stand up against vindictive politics, driven by envy, motivated by jealousy and practiced without integrity.”

The statement, titled: “Those Who Come To Equity, Must Come With Clean Hands,” reads in full:

At 3.00am on Thursday 2nd of January 2020, the Governor of Kwara State, AbdulRahman AbdulRazaq, gave orders to the Police to open fire on aged women, at the contested welfare home, popularly known as “Ile Arugbo” (Home for Aged), owned by my father, Dr. Abubakar Olusola Saraki.

As a staunch and loyal member of APC, I have kept quiet to date on the happenings in my state, Kwara State. I had done this for a number of reasons including trying to “keep my head when all about me are losing theirs”.

But all in all, I had kept quiet, as being a loyal member and supporter of the party, i did not want to get into any squabble with the Governor despite so many provocations.

Again, as a loyal and dedicated daughter of my father, Dr. Abubakar Olusola Saraki, whom I hold in very high esteem, I did not want to express my opinion on the propriety of the Governor’s recent political actions as it would be seen as biased because the late Waziri is my father.

However, given the turn of events and the violent nature of the Governor’s position, it is only right for me to speak now.

There might have been some elements within my party, APC, who wanted to change the ‘O To Ge’ narrative of the 2019 elections to be about the Sarakis, and not about what it was — the removal of a failing PDP Administration.

But clearly by some recent steps taken, especially with Thursday’s actions, Kwara State APC must be careful to not allow a few elements with their own agenda, other than governance, to turn their personal vendetta into the official position of APC in the State.

They must not be allowed to hijack the narrative of what our party stands for.

The APC has, since its inception, preached and worked earnestly for genuine good governance, security, increased welfare, progress and development of the people, as exemplified by President Muhammadu Buhari, who in the face of direct provocation and deep personal attacks remains true to the oath he took to govern ALL Nigerians, in spite of allegiances.

That is why it is important that my silence is not misconstrued as tacit approval or support for the actions taken by the Governor.

As stated earlier, I chose to refrain from commenting on the onset of this land saga and did so for three reasons:

(1) I believed that this was a matter that would go through the rightful forum and due process to ascertain and establish my father’s legal rights or otherwise.

(2) My family individually and/or collectively have NEVER derived and continue not to derive ANY commercial benefit from that piece of land.

At the end of the day, what is on that land is nothing — no block of flats that the family is getting rent from; no office building, no factory, or any other commercial venture. Just a bungalow where the old women gather and get their basic needs attended to.

(3) Nonetheless, were my father alive today, surely, he would have been saddened to see bulldozers in Ile Arugbo. However, I am comforted by the knowledge that my father’s good work and his respect, support and love for the aged, which was sadly lacking in the Governor’s activities of Thursday, simply cannot be erased by demolishing a bungalow.

When it comes down to it, Ile Arugbo is a piece of bare land that holds symbolic value of what my father stood for — humanitarianism, and that doesn’t start nor end with a building.

But after the events of Thursday when the aged women were tear gassed and shot at in the wee hours of the morning (3:00AM), I do not want my silence to be misconstrued, as mischief makers have used that silence to attribute false statements allegedly made by me.

The level of force and violence that the Governor chose to adopt was totally unwarranted.

What resistance to protest justifies firing live ammunition and tear gassing old women? Even my own personal home was not left out of the attack as numerous empty bullet shell casings and dispersed tear gas canisters were found inside my home.

I feel that at this point not only as a child of the late Waziri but as a member of the APC, I need to speak.

I do so not only as a daughter but as a member of the party, to ensure that those thousands of members of APC who are Sarakites that supported the ‘O To Ge’ Movement are not alienated. In addition, I do so to ensure that the resounding victory that APC enjoyed in Kwara is not short-lived or diminished.

Governments acquire properties, even compulsorily without necessarily resorting to unprovoked violent attacks in the dead of night.

It is especially disrespectful to me personally, as a member of the APC since 2015, who welcomed and supported those who only joined us a couple of months to the elections, which includes the Governor himself, that my position as a member of the party was not given any consideration and/or regard when approaching this issue.

Furthermore, given how well and how long I have personally known the Governor beyond Kwara State, so much so that I have always regarded him as one of my older brothers.

Even in the political arena, over the years, we have known each other as political opponents and allies and I have always accorded him respect which he has not accorded me.

As one of the APC leaders in the State, I have consulted broadly and have also sent messages appealing to party members not to be provoked by this unwarranted assault on my late father.

I do this with all sense of responsibility so that party cohesion and unity is not undermined by arbitrariness to rush into an attempt to settle perceived old generational family political scores.

Revenge cannot be a policy thrust of governance.
I am also using this opportunity to appeal to our teeming supporters to remain calm and poised and maintain peace in the face of unwarranted provocation. “Allah Bring about ease after difficulty” Q 65 vrs 7.

I call upon the Inspector General of Police to call the State Commissioner of Police to order — using security agencies and live ammunition to settle political and personal scores is NOT what the Buhari Administration is about.

We must stand up against vindictive politics, driven by envy, motivated by jealousy and practiced without integrity.

Honour should be our code.