Madumere hails former AIG Ezike as he pulls out of service

- Describes him as epitome of professionalism
By The Nigerian Voice 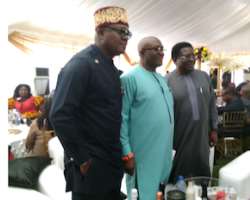 The immediate past Deputy Governor of Imo State, Prince Eze Madumere has congratulated Assistant Inspector General of Police Chris Okey Ezike for a successful service to father land and pulling out meritoriously.

Prince Madumere made the statement while interacting with newsmen at AIG Ezike's thanksgiving reception ceremony on Monday in Anambra State.

The former Deputy Governor hailed former AIG for his professionalism, saying that he commends him for the way he conducted himself even in the face of threat from desperate politicians.

"We in Imo State cannot forget in hurry what AIG Ezike did in the state as the Commissioner of Police. He was a seasoned administrator, who ensured that bottle necks were reduced to the barest minimum while combating crime and ensuring there was law and order in the state.

" His prompt response to dire situations was proactive. And when it was time to face desperate politicians, he played by the rules and refused to be drawn into filthy engagements and that was why he was dreaded by certain politicians.

"Today, we are here to celebrate him because of whom he is and what he stands for. He was an epitome of professionalism laced with good conscience".

Prince Madumere also prayed God to bless him and grant him energy and more wisdom as he continues to contribute to the nation building.

" You can see he is still young and it is our prayer that God grants him long life with good health".