The Fallacy of Money Rituals 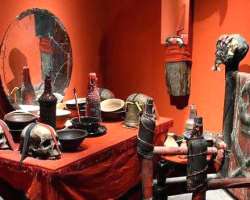 One of the most ludicrous things emanating from the dark continent of Africa is the belief that the murder of human beings can bring forth money. This preposterous view is largely and ferociously projected by Nollywood, the world’s third largest movie industry in the world. Many movies are made where indigent but ambitious young men become rich by joining dreaded secret cults and using their loved ones for money making rituals which makes them extremely wealthy but with terrible prices to pay for the sudden wealth.

We recall the ‘Otokoto’ saga in Imo state in the 1990’s where human skulls were found in a popular hotel in the south eastern state ostensibly used for money making rituals. So many cases abound of these rampaging evil that has eaten deep into the fabric of the society like an undetected cancer.

It was with sadness that Nigerians woke up to the news of the gruesome murder of Favour Seun Daley-Oladele, a promising 22 year old final year theatre arts student of the Lagos State University by her boyfriend and his murder for money making rituals. The morally bankrupt duo then cooked her organs and ate them in the belief that it would make them wealthy beyond their wildest imagination. They were aided in this sinister act by a Pastor who they paid the paltry sum of 210,000 naira.

It is high time that the African mind got totally liberated from these asinine superstitions. What on earth is the correlation between a human being’s part and money? The late Indian Nationalist and liberation fighter, Mahatma Ghandi once talked about the seven deadly sins which included wealth without work. The duo wanted wealth but didn’t want to put in the required efforts to legitimately acquire it. How can a mother aid and abet such a heinous crime? It goes to show the moral bankruptcy and dysfunctional parenting by some parents who lead their children and offspring to avoidable ruin.

If money rituals really worked why the contemptible pastor accept to intervene for such a piddling? Why are the herbalists or Babalawos who promise riches through money making rituals always so impoverished and dependent on the ‘beneficiaries’ of the scheme to make them rich?

The rest of the world has advanced greatly with the aid of science and technology which has been life better for their citizens while we are still stuck with beliefs which were reminiscent of the Middle Ages where people were burnt at the stake at the mere suspicion of being witches.

These acts are so rampant where materialism has taken roots. This malady started during the military rule where the economy collapsed and many people sought instant relief in get rich quick schemes. The worship of money where many people with no known sources of income suddenly become very wealthy and are honoured by their respective communities spur many to try their luck with the cruel murder of their fellow human beings with the promise to get extremely rich through it. The incentive to work is lost in a society that prefers to honour crooks and people of questionable character and hold them up as her heroes. Hard work is shunned since it doesn’t pay as it is not uncommon to see honest civil servants who work hard for thirty-five years but cannot live a peaceful life of retirement as their pensions cannot take them home; many of them even die waiting for the mirage called pension as the government cruelly withholds it from them in the twilight of their lives. What about honest workers in the private and even public sector whose salaries and entitlements are denied them at the end of the month? These toilers who toil for their slave masters day and night are unable to meet their obligations to their families.

The dysfunctionality of the country where more premium is placed on wealth not caring about its source inevitably fuels the demand for money making rituals which has sent thousands to their early graves. There will be more killings as long as we don’t restore noble societal values where hard work and decency are duly rewarded. What do you make out of when a honest man who returns money he or she discovers is mocked while the corruption infested individuals who make the people weep are given honourary doctorate degrees, chieftaincy titles and national honours?

The opportunities for legitimate wealth aspiration are really shrinking and the option which seems attractive and realistic seems to be crime and this fuels ritual murders.

The government should embark on a massive re-orientation of the minds of her citizens on the futility of these so called ritual riches. It simply doesn’t exist and is a waste of time and lives. The orientation should be done in the indigenous languages as well as there is the urgent need to purge the minds of the majority of the populace against this nauseating myth. The religious houses should also join this effort. They should live by example and stop honouring crooks with front seats and accepting funds from questionable sources for their never ending projects.

There must be national rebirth which will make materialism a thing of the past. This can only be possible if the government intervenes to make opportunities available to those who are willing to put their nose to the grindstone to legitimately work it out.

May the soul of Favour rest in peace and may her killers be punished to serve as a deterrent to others that ritual murder doesn’t pay.