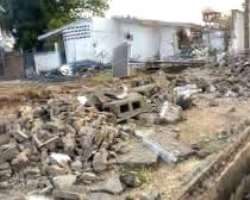 Kwara State Government says the land reclaimed from the Saraki Family was not its ancestral home.

Rafiu Ajakaye, Chief Press Secretary to Governor AbdulRahman AbdulRasaq, disclosed this in a statement in Ilorin on Thursday.

Ajakaye said: “The property being reclaimed by the state government is not Saraki’s ancestral home as being portrayed in some section of the media.

“The Saraki’s ancestral home is in Agbaji, while the property we are talking about is in the heart of Government Reserved Area (GRA), Ilorin.

“The government position is that the land was (and still is) a public property originally meant for the construction of a secretariat, a civil service clinic and parking lots.

“However, ownership of the property was spuriously transferred to a private firm and for commercial purpose without the firm paying a kobo to government or obtaining the Certificate of Occupancy.”

According to Ajakaye, what the government has done was to reclaim the land in the spirit of what it was originally meant for.

Olanrewaju said in a statement that the reclamation started in the early hours of Thursday to avoid needless confrontation.

“Attempts by some persons to provoke government’s agents on lawful duty were resisted by the security agents who exercised highest level of restraint and professionalism,” he said.

He said government was never served court papers on the matter as claimed by some people.

“We state that no court paper has been served as at the time the government took steps to preserve what lawfully belongs to the people,” he added.

Olanrewaju urged the people of the state to remain calm, peaceful and be guided only by facts of the matter.

He also advised the people not to be drawn into emotional outburst that was targeted at distracting the public from the issues at stake.

“While the administration is focused on restoring sanity to the state after years of barefaced impunity, we will do so within the limit of the law,” he said.