Enugu International Airport Will Be Back To Use Before Easter 2020 - Hadi Sirika, 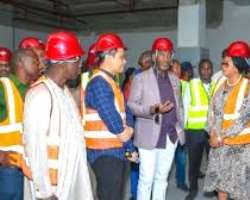 The Minister of Aviation, Senator Hadi Sirika, has said that the Akanu Ibiam International Airport, Enugu would be ready before the Easter celebration in April.

Sirika who said he was satisfied with the level of work done on the project promised that he would soon begin a countdown on the reopening of the airport which was shut down in August last year.

The Minister spoke when he inspected the airport with the Permanent Secretary in the Ministry, the Managing Director of the Federal Airports Authority of Nigeria (FAAN), Capt. Rabiu Yadudu and officials of the Enugu State Government.

Also on the inspection was the Chairman, House of Representatives Committee on Aviation, Nnolim Nnaji.

According to the Minister, the Muhammadu Buhari- led government takes the completion of the Enugu Airport project seriously because of its strategic importance to the state and the entire South Eastern Region.

“I am very satisfied with the level of work done. According to the programme of work approved and established by us, we are beating the deadline. We will deliver the runway before Easter,” he said.

Sirika also inspected the new terminal at the airport being wholly funded by the Federal Government.

The Minister assured the people of Enugu and all users of the airport to expect a brand new airport, which would have all the modern facilities and equipment to enhance safe flight operations.

“The runway when completed will have other equipment such as the instrument landing system, airfield lightning, taxiway lighting and every single equipment and system that will enhance safe flight operations,” he further stated.

The Deputy Governor of Enugu State, Cecilia Ezeilo, who represented Governor Ifeanyi Ugwuanyi noted that the closure of the airport is affecting “everybody in Iboland” but expressed delight on the pace of work.

The House Committee Chairman expressed optimism that the airport would be delivered before Easter as promised, saying this would make the Easter celebration enjoyable to every user of the airport including people from parts of Cross River State.