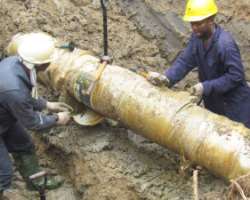 The Nigerian National Petroleum Corporation (NNPC) has announced a decline of 81% in the number of pipeline vandalism incidences in the course of its operations in October last year.

The corporation, in its latest financial and operations report, stated that, in October 2019, 35 vandalised-pipeline points, representing a decrease of 81 per cent from the 186 vandalized-points in September 2019, were recorded.

NNPC said out of the vandalised points, eight failed to be welded, while only one pipeline was ruptured, with Ibadan-Ilorin axis accounting for 34 per cent of the breaks, while ATC-Mosimi and other routes accounted for 23 per cent and 43 per cent, respectively.

The corporation, in the report, also announced a trading surplus of ₦13.23billion in October 2019, representing an increase of 54 percent vis-à-vis the ₦8.59billion surplus posted in September last year.

The NNPC explained that the figures reflected the sustained streak of positive results in the operations of the national oil company.

The NNPC said the increase of 54 per cent trading surplus in October 2019 accounts of the corporation was mainly attributable to improved trading surplus posted by its flagship Upstream subsidiary, the Nigerian Petroleum Development Company (NPDC).