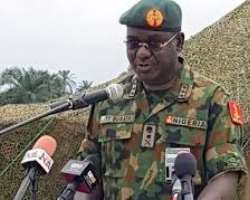 The Nigerian Army has recognised five soldiers with awards and special promotion for their gallantry in the fight against insurgency in the north eastern part of the country.

The awards were given at the 2019 Nigerian Army West African Social Activities (WASA) on Monday in Gwoza, Borno State.

Two members of the Civilian Joint Task Force were also recognised for their gallantry and bravery in the fight against insurgence.

The Chief of Army Staff, Lt.-Gen. Tukur Buratai, said that WASA was an age long tradition of Nigerian army that brings all officers and soldiers together to mark the end of the year and usher in a new year.

Buratai said that the event was also an opportunity to reward the gallantry of personnel in the discharge of their constitutional duties.

He said that the choice of Gwoza for the 2019 edition was an indication that the troops had recorded success in the war against Boko Haram insurgency in the north east.

General Buratai further commended the personnel for the successes so far recorded in all other operations across the country and assured them of improved welfare in the year 2020.

COAS also commended the field commanders and principal officers for the support and implementation of all the strategic directives.

According to him, if you pass directive from the headquarters to the field commanders and they fail to execute it, that directive becomes useless.

“Your operational and tactical capabilities have contributed to the successes recorded so far,” he said.

General Buratai however commended President Muhammadu Buhari for his guidance, support and motivation for the army to have the wherewithal to win all wars as well as the national assembly for their support.

In his remarks, Governor Babagana Zulum of Borno State said that activities like WASA could serve as a tool to encourage the troops and boost their mental capacity.

Zulum said that the celebration of the annual event by the Nigerian army had over the years confirmed its commitment to appreciate and promote diverse cultural diversity in the army.

Commending the successes recorded by the military in the war against insurgency in the state, Zulum applauded the efforts of the CJTF and Vigilante Hunters for their voluntary support to the Nigerian army in the fight against Insurgency.

The governor further urged the federal government and army authorities to ensure that all the necessary logistics needed for the military operations at the war front were provided and given to the troops to successfully fight the war.

He however called for judicious utilisation of resources available to them, urging them to develop the mindset to reduce corruption and sabotage.

Zulum also donated N200,000 each to the seven outstanding gallant soldiers and civilian JTF and pledged to double the allowances of the recognised civilian JTF members.

On his part, the Chairman House of Representatives Committee on Army, Mr Abdulrazak Namdas, said that the successful hosting of WASA in Gwoza, was a confirmation that the Boko Haram has not only been ‘technically defeated but practically defeated’.

Namdas observed that there was synergy between the army and other paramilitary agencies in the country and urged them to continue in that manner.

He however requested for details of the soldiers recognised for their gallantry to be presented to the national assembly for recognition.

WASA is an annual event of the Nigerian Army to mark the end of the year and usher in the new year.