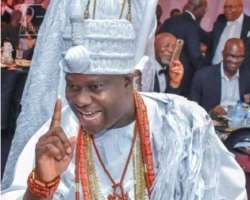 The Arole Oodua & Ooni of Ife, Ooni Adeyeye Enitan Ogunwusi Ojaja II has expressed hopes that Nigeria will record unprecedented economic progress in the year 2020 if the ongoing local production policy of government can be embraced and supported by the citizens, saying the rapid economic growth of any nation is only achieved when locally made goods are promoted through local patronages before exportation.

The Africa foremost monarch said this on Monday in his Christmas/New Year message through his Director of Media & Public Affairs, Comrade Moses Olafare congratulating Christians across the world especially Nigerians on the commemoration of the 2019 edition of Christmas which he described as a season of love and reflections of teachings of Jesus Christ.

"Christmas is a festive season that must be seen as a moment of love and reflections on the good life and teachings of Jesus Christ. Christians must be very friendly with members of other faith including Islamic and traditional religions for we all belong to the same God Almighty." Ooni said.

Also as part of the religious tolerance admonition, Ooni Ogunwusi who the Co-Chairman of the National Council of Traditional Rulers of Nigeria(NCTRN) condoled with the families and friends of all the victims of terrorist killings in the country especially the very recent 11 Nigerians who were last week killed by the bloodthirsty terrorists who he berated as barbaric monsters that will soon be completely defeated by the Nigerian people.

"The ISIS, Boko Harram or whatever names they are called, are never followers of Allah or God as they claim to be, it is even sacrilegious for anyone to fight or kill for God. They are nothing but bloodthirsty barbaric monsters that Nigeria will soon defeat completely.

"Religion should not divide us because that is not the plan of God for us as a country, we must love ourselves and we must love one another regardless of religious, political, cultural and ethic differences because our God is love.

"As we exchange greetings and gifts during this beautiful season, let us also exchange good gestures and a strong heart of fellowship in order to create a better Nigeria that we all can be proud of." Ooni Added.

On the border closure and local production policy of the Federal Government of Nigeria, the Ooni is hopeful for a stronger national economy and more jobs for the youths.

The border closure is a local production advancement strategy which helps us to have internal economic growth capable of generating jobs for our youths.

Patronizing local services has the net effect of job creation and assuring local producers remain economically viable. The money generated by patronizing local small businesses generates local taxes and fees that then are reinvested in the economy. The rapid economic growth of any nation is only achieved when locally made goods are promoted through local patronage before exportation. This is why we all must support the policy.

"Come year 2020, the Ooni is very hopeful for the betterment of the teeming youths of this country and the reason is because this government has a good direction the early budget implementation as the budget is expected to hit the ground from January unlike what it used to be. This if done, will assist the government in executing several projects across the country for the people through which standard of living will be improved." Ooni stated.

The statement concludes by charging the government to ensure that all Nigerians see Nigeria as an egalitarian society where no one, religion and tribe will be taken in superiority to the others. This according to the Ooni will go a long way dousing the tension of marginalization which has largely caused disharmony in the country.

"Egalitarianism is the solution principle to lead Nigerians on the path of peace, unity and progress. Nigerian people are equal and deserve equal rights and opportunities, nobody must be treated like a second fiddle, no religion must be discriminated against and no tribe must be shortchanged in the matters of civil service balancing, political appointments, empowerment programmes, education, infrastructures and wealth distributions. With this, Nigerians will unite and support the government for a better Nigeria in 2020. Happy New Year to Nigerians!"