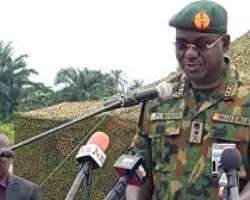 The Nigerian Army has organized Nigerian Army Medal Parade in Gwoza on Monday to honour gallant officers and soldiers who have been part of Operation Lafiya Dole - a counter-insurgency and counter-terrorism operation in the North East since 2015.

The Chief of Army Staff, Gen. Yusuf Tukur Buratai, among other military top officers were already in Gwoza, Gwoza Local Government Council Sunday ahead of the event which was scheduled for Monday, 30 December 2019.

In his remarks at the Emir of Gwoza's palace, the COAS said", the choice of Gwoza for the event is symbolic. It Is in order to consolidate on the troops’ efforts in retrieving the locality from the hands of Boko Haram insurgents.

Buratai further reflected on the past activities of the Boko Haram insurgents in Gwoza while recalling the peak period of the Boko Haram insurgents and declaration of Gwoza town as their Caliphate, pointing out that, the 2019 annual NASA/WASA and medal parade will further boosts the morale of the troops, build confidence in Military operations as well as reinforce the military control in the area.

"The choice of Gwoza is quite symbolic, and you know, the misadventure of Boko Haram terrorists that were here sometimes and even attempted to declare it their headquarters.

" This is now history, they have been flushed out and peace has now returned. And for us to now further consolidate on this... we are here to conduct this parade,' Gen. Buratai said

The COAS added that the event is being organised annually to honour gallant officers and soldiers to provide an avenue for them to interact with top military officers.

He however explained that the event is usually held concurrently across various barracks in Nigeria, which enables the troops to as well interact and celebrate successes with their families.

Accordung to the COAS, apart from the medal parade on Monday, several traditional dances will also be featured in the ceremony.

The General also condoled the emir on the demise of his father and equally invited the monarch to witness the event.

In his remarks, the Emir of Gwoza, HRH, Alhaji , Muhammad Idrissa Timta, thanked the COAS for choosing Gwoza, one of the largest Local Government Council in the state for the event while commending his efforts towards the restoration of peace in the state, North East, and Nigeria at large.

The royal father also commended the troops’ efforts in the fight against Boko Haram insurgency, while appealing to the COAS to establish Military Secondary School in Gwoza town.