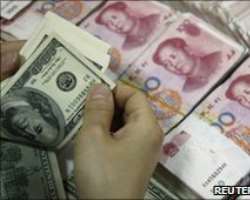 China has taken its first step towards honouring a pledge to let the exchange rate of its currency float more freely.

Beijing announced plans on Saturday to make the yuan more flexible, breaking its strict peg to the US dollar.

And on Tuesday, for the first time since the pledge, its central bank raised the centre point of the currency's official trading band.

But analysts said China would still limit the appreciation so as not to damage its export-led economy.

'Limited' gains
The move, ahead of the G20 summit later this month in Toronto, has tempered market fears of a possible trade war between China and the US.

But Beijing has ruled out a large, one-off move in the yuan's value.

China's central bank says it plans to keep the Chinese yuan “stable” and there will be no immediate revaluation of the currency.

“China has backed up all the talk with action,” said Brian Jackson, of Royal Bank of Canada in Hong Kong.

He added that China's president, Hu Jintao would now arrive in Toronto “with tangible evidence that China is serious about increasing the flexibility of its exchange rate”.

However, Mr Jackson said that in the coming months there would be only “limited” gains against the dollar.

The Chinese central bank currently sets a target exchange rate against the dollar each day.

By raising the target level by 0.43% on Tuesday, the central has allowed the yuan to rise.

The change in policy will make it easier for Asian countries that compete with China for exports to allow their own currencies to rise.

Pressure
The Chinese have found themselves in a tough situation over the yuan in recent months.

The country has come under increasing international pressure – particularly from the US and India – to change its currency policy.

The US has complained that China is artificially keeping the value of the yuan low to help its exporters at the expense of foreign competitors.

Meanwhile, the euro has fallen more than 17% against the dollar – and therefore also against the yuan – since the European debt crisis began in December.

The change in yuan policy may involve switching the peg from the dollar to a basket of currencies, including the euro, that better reflect China's diverse export markets.