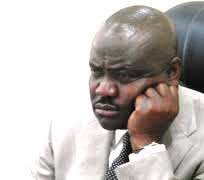 The PDP Leaders of Thought have said the recent media attacks by the Governor of Rivers State, Mr Nyesom Wike on Bayelsa state Governor, Honorable Henry Seriake Dickson in an affront to civility and arrogance taken too far.

In a statement in Abuja, and jointly signed by the Chairman and Secretary, Elder Akin Shomolu and Alhaji Kabiru Alhassan, the group strongly condemned the media attacks by Rivers State Governor on his Bayelsa State counterparts, a situation it described as the "arbitrariness that Governor Wike has become known for."

"We wish to express dismay, at the conduct of Mr Wike, which was purely an attempt at intimidating the good people of Bayelsa State, whose mandate, Governor Seriake Dickson still holds, as an incumbent governor. The hostility of governor Wike to the people of Bayelsa State, has never been hidden and the recent actions of the Rivers, only attracts our attention and other well meaning Nigerians, because he went beyond every known boundary of civility."

They stated that the tantrums of the Rivers Governor is not only uncalled for but is capable of fanning the Amber's of discord between the niegbouring sister states.

The group further said, the resort by Wike to gutter language in describing Governor Dickson, his family and by extension, the people of Bayelsa State may have been borne out of the personal hatred and frustration, especially whenever Governor Wike is confronted with the popularity of Governor Dickson and his acceptability across the Niger Delta.

“Mr Wike's attacks and subtle threats is nothing short of vituperation borne out of irritation with the role of Governor Dickson in unifying the Ijaw nation, both in and outside Bayelsa State."

“If we may ask, what has been the exceptional achievement of Governor Wike in adressing the mountains of challenges faced by the people of Rivers state today, including an upsurge of the violence across the state.? Why is he belly-aching about the clear headed leadership which Governor Dickson has continued to provide within and outside Bayelsa State?

His regular threats to the party leadership clearly shows a man who is uncontrollable, lacks respect for constituted authority, and sees himself as an Emperor who must be obeyed at all cost the group added.

The group advised Governor Seriake Dickson and the people of Bayelsa State not to be deterred by the antics of an arrogant political adversary who was out to fan the embers of disunity in the region.

They called on leaders,and men of Goodwill across the country to rise up in one voice to condemn the actions of the Rivers State Governor