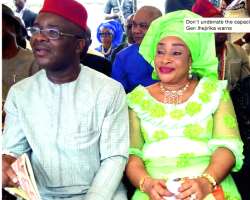 The people of Ohafia Ancient Kingdom in Ohafia Local Government Area of Abia State, recently, rolled out their drums to honour Lt.Gen.Onyeabo Azubuike Ihejirika, Rtd, CFR, former Chief of Army, in a colourful ceremony held at Achichi Ohafia in Elu Ohafia, the privy council of Ohafia people; where any decision taken on that ground is binding on all Ohafia people, which sacredness is maintained till date.

In a preamble to the conferment of the Chieftaincy title on Gen.Ihejirika, the Secretary, Council of Ohafia Monarchs,His Royal Majesty,Ezieogo Mba Odo Okereke, JP, said the decision to honour Lt.Gen.Ihejirika was collective and the Monarchs have the right to honour whoever they feel should be honoured.He stated clearly that it was not a political gathering as it was devoid of colour of any political group rather bore a national colour.According to him, Ihejirika was not honoured because he was a Chief of Army Staff or a retired General.He was honoured because he (Ihejirika) rehabilitated a place acquired by the federal government,abandoned and became a hideout for criminals. In his words “Ohafia is proud to honour Gen.Ihejirika who helped the Federal Government to actualize the real reason for the acquisition of the land in Ohafia, which displaced many villages and a became a den for thieves and a hideout for armed robbers.At a point, Ohafia started regretting for giving out the place and became a thorn in our flesh.General Ihejirika and the hierarchy of the army took it upon themselves to revive that place.Even for that singular act, Ohafia is very proud of him”

He said “Secondly, at a point in time when the history of Nigeria was to be written that no Igboman has ever been a Service Chief of the Nigerian Armed Forces, suddenly, even our own, from Isuikwuato became a Chief of Army Staff.” He emphasized that Ohafia does not sale her Chieftaincy titles and that whenever Ohafia people gather at Achichi Ohafia it was to make a statement,"We do not care whose ox is goored, therefore,honouring Gen.Ihejirika was giving honour to whom honour is due” he concluded.

In his remark, the Chairman of the occasion, Sir Linus K.Iro, a count of Council of Ohafia Monarchs, described Gen.Ihejirika as a man who should be honoured,having brought peace to Ohafia and its environs through the presence of a Military barracks.He commended the Monarchs of the 26 towns and villages of Ohafia Ancient Kingdom for taking such a decision to honour whom honour is due.

The Father of the day, Chief Okwara O.Okwara, expressed happiness for honouring his in-law as his first daughter is married to an Ovim man in Isuikwuato.He regretted that the conferment ought to have taken place earlier but said,it was better late than never.

In his speech, the President General, Ohafia Improvement Union Incorporated, Elder Ukpai K.Ukpai welcomed Gen.Ihejirika and expressed delight for the conferment of an honour on a man who has done a lot to uplift Nde Ohafia.He requested for a support from General Ihejirika whenever called upon.

The Governor of Abia State, Dr.Okezie Ikpeazu,who was the Special Guest of Honour and ably represented by the Deputy Governor of Abia State Rt.Hon.Sir Ude Oko Chukwu,thanked Council of Ohafia Monarchs for honouring Gen.Ihejirika, considering his accomplishments all through his military career in Nigeria.He expressed the commitment of the Abia State Government to do her best in developing Ohafia to ensure that the present state administration leaves the state better than it met it.

Pronouncing the conferment, His Royal Paramountcy,Prof. E.U.L.Imaga, the Udumeze of Ohafia and Chairman, Council of Ohafia Monarchs,commended General Ihejirika for rehabilitating the abandoned Ohafia barracks which contributed in countering the menace of kidnappers and in restoring peace and security in Abia State, as the residents including business men and women were fast relocating outside the state. It was General Ihejirika’s rehabilitation of the abandoned barracks at Ohafia and establishment of 14 Brigade that stopped the exodus of men and women from Abia State. The rehabilitation of the barracks at Ohafia has affected the life of an average Ohafia man positively.The Udumeze of Ohafia,Prof.E.U.Imaga said the council decided to confer the title on Ihejirika following his good contributions and track record for the development of Ohafia,Igboland and the country at large. “We confer you with the title of “Achi Na Agbara Oha of Ohafia” for your great contribution to Nde Ohafia, the entire Igbo extraction and the country in general,” he said.

Gen.Ihejirika was honoured alongside,Nigeria’s High Commissioner to Pakistan,Major General Ashiniyu Adebayo Olaniyi, who was in charge during the rehabilitation of the Ohafia Barracks.Gen Olaniyi said, the rehabilitation which led to the commissioning of the barracks on the 18th of April, 2011 by former President Goodluck Ebele Jonathan was a landmark achievement as it restored security, springing up of businesses in Ohafia and its environs,therefore, recognizing Gen Ihejirika was not a misplaced priority.He described Gen Ihejirika as a de-tribalized General and a visionary leader.He expressed happiness for being honoured with the title of Ezi Enyi Ohafia which translates to friend to Ohafia.He said the title will build bridge between Ohafia and Oyo state, his state of origin and promised to be a good ambassador of Nde Ohafia in addition to being a good ambassador to Nigeria in Pakistan.

In his response, Gen Ihejirika expressed his profound appreciation to the Ohafia Ancient Kingdom for the traditional title, Achi Na Agbara Oha of Ohafia bestowed on him .He said “ I did not know that eight years after the rehabilitation of the barracks, a huge crowd could gather to honour me.” He regarded the honour as a covenant with Nde Ohafia, which implies that he has become part and parcel of Ohafia Ancient Kingdom and advised for commitment in community service.