Christian Democratic Movement of Nigeria (CDM) condemns killing and persecution of Christians, calls for meetings between religious groups in the country 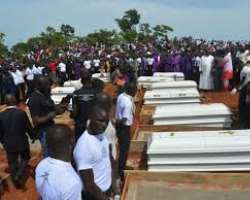 The Christian Democratic Movement of Nigeria has condemned the killings of 10 Christians who were captured in the past weeks from the north-eastern Borno State. The Movement also berated President Mohammadu Buahri and the Borno State Governor for not providing adequate protection and security for Christians in Nigeria and Borno state.

This was contained in a statement issued and signed by the National Coordinator of the Movement, Wole Adedoyin after an emergency meeting of the Movement in Ibadan on Friday.

Though, President Muhammadu Buhari has condemned the apparent killings and urged Nigerians not to let themselves be divided along religious lines. But CDM which berated President Muhammadu Buhari for not taken any action in the past on major religion killings in the country called for the perpetrators of violence in the region to be held to account. The Movement also accused the international community of failing to act.

CDM also accused President Muhammadu Buhari led government of failing to act to help put an end to religion terrorism in the northern part of the country.

“We already know that President Buhari’s fight against corruption is one sided. He should not limit his fight against fake corruption agenda is pursuing. He should concentrate on other national issues begging for his attention. Inter religious groups like CAN and their Muslim counterpart should be called for an emergency meeting.” Adedoyin said.

CDM also noted that the attacks on Christians killed specifically due to their religion was as a result of ISWAP renewed mission to persecute and kill Christians.

"We pray for the eternal repose of the souls of 10 Christians killed. We also offer our prayer for their bereaved family. We make our appeal once again to President Muhammadu Buhari to act swiftly and go after the perpetrators of this heinous crime and bring them to justice." Adedoyin said.