Ojobo Community Protest: Any Attempt To Use Force Will Be Resisted --- Iyc 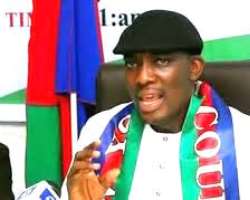 The Ijaw Youth Council (IYC) has warned that any attempt by the Shell Petroleum Development Company (SDPC), to employ the use of force on protesting Ojobo Community, would not only be seen as the height of wickedness but would be resisted.

IYC President, worldwide Pereotubo Oweilaemi, Esq., gave the warning in a press release issued and made available to our correspondent in Asaba.

According to him, "The siege on SPDC platform at Beniseide Flow Station by Ojobo Community should not be given aggressive response. The people who are the host community to the SPDC's platform are only embarking on a peaceful protest which is within the ambit of the laws.

"SPDC should immediately look into their complaints, given rise to the peaceful protest and occupation of the platform. It is evident that Shell has not adequately discharged its corporate responsibilities to Ojobo Community in spite of the economic wealth it is getting from the Community.

"Ojobo people will not leave the platform until their demands are met. What is delaying the Ojobo Cluster Gas Turbine Project even when Federal Government has given approval to it? The Community is in darkness. There is no portable water to drink. The Company should address the concerns of the people instead of bullying them. They're only drawing the world's attention to the sorry state the Ijaws are passing through in the hands of the multi national oil companies and their Nigerian collaborators.

He said the Community have the backing of the body, "The Ijaw nation is solidly behind the peaceful protest embarked upon by Ojobo people at Beniseide Flaw Station. Any attempt to use force on them will be resisted. The security agencies should be warned. They should not commit themselves as willing tools in the hands of SPDC to ferment strife in the Community. Let us be guided by the history of our recent past. We need peace in the Niger Delta", the statement added.