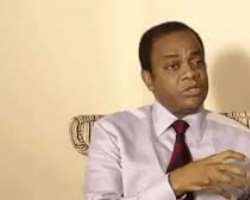 Donald Etim Duke means many things to different people. Some see him as a visionary who put his state, Cross Rivers on the global map while as Governor between 1999 and 2007 when he built the Obudu Cattle Ranch and Tinapa, others see him as a politician with potentials who has what it takes to effectively lead the country and take her to the Eldorado and zenith of development as well as the famous promised land flowing with milk and honey.

He was in the news recently when he spoke at a public lecture organized by the Brotherhood of the Cross and Star in Calabar, Cross Rivers State. He spoke in favour of state or community policing. The Punch Newspapers captured his thoughts when it reported: He described policing as “a very local thing which requires a lot of intelligence and knowing the people who you work with.’’

According to him, anything that is central must be localised.

He said, “If you send someone from Edo to come and become the Commissioner of Police in Cross River and the Divisional Police Officer is from a different state, how do you expect him to understand the peculiarities of the people?

“The failure of the military administration in Nigeria was posting someone from Sokoto to be an administrator in Cross River. It will take him a long time to understand the nuances of the people of the locality.’’

His view has been mine and that of a cross section of Nigerians for some time now. The military intervention into the governance of the country changed the set up from a regional one to a unitary or centralized one which greatly altered the way and manner the security apparatus operated in the state.

Before independence, we had the native authority policing model which was a community policing set up. Those born and bred or who knew an area sufficiently well were recruited as policemen and they were well grounded in the culture, mores and norms of the people that they policied. They also lived in the area among the people and the latter acted as informants on the suspicious activity of societal deviants amongst them and also the presence of strangers in their community. They drank at the local bars and also ate at the cafeterias and the owners of these places also acted as informants and whistle blowers since they closely interacted with the people.

All this changed in 1966 when the regime of Major-General Thomas Johnson Umunnakwe Aguiyi-Ironsi came to power in the aftermath of the Chukwuma Kaduna Nzeogwu coup of January 15, 1966. He centralized the military command and adopted a unitary system of government which also included the police force. Police officers started getting transferred from one part of the country to the other and to places and terrains where they were not familiar in any way with to keep up with the centralized structure. These officers weren’t familiar with the language and culture of the places they were posted to serve in and as a result weren’t able to effectively interact with the locals. The commissioners of police are in most cases from states different from the state that they superintend over and as a result are severely handicapped to effectively combat the menace of crime which is rising on a daily basis.

The bad economic state has made crime very attractive as Nigerians are embracing it as a survival tool. The criminals know the areas much more than the policemen who are overwhelmed by the lack of intelligence gathering ability no thanks to the defective structure that they are forced to operate under.

In the developed nations of the world, policemen and women operate community policing which makes them much more effective to combat crime and the ruinous activities of criminals. It is unheard of for a policeman born and bred in Yorkshire to head the unit in London as he may not be too acquainted with the latter area to root out the activities of the criminals’ resident there. The locals wouldn’t feel comfortable relating with a stranger cop who isn’t well briefed with the nuances of the area he or she is serving. Local informants or whistle blowers can only effectively communicate with their friends in the force who they knew from way back.

We are currently plagued with the menace of armed insurgency and kidnapping and this requires more sophisticated forms of intelligence gathering which is best guaranteed via community policing. Kidnappers now operate with brazen confidence and it’s crystal clear even to the blind that they possess insider information which the police is handicapped to effectively counter as most of them still grapple with the terrains in which they are posted to.

We hope that the policy makers can take a critical look at the model that worked well for the country before independence and in the First Republic so that crime can drastically reduce and our policing methods can be more effective.