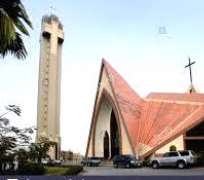 The Nigerian Supreme Council for Ecclesiastical Affairs (NSCEA) has commended USA saying, a good step in right direction by the U.S.A. government, as the United States of America has placed Nigeria on a Special Watch List (SWL) of countries that have engaged in or tolerated severe violations of religious freedom over the last weekend. These are countries of Particular Concern under the International Religious Freedom Act of 1998 for having engaged in or tolerated “systematic, ongoing, and egregious violations of religious freedom."

A statement on Friday 20th. December 2019 by the US Secretary of State Michael Pompeo explained Nigeria was added to the list alongside Sudan, Russia, Cuba, Nicaragua and Comoros Island. The United States of America also designated Boko Haram as an Entity of Particular Concern alongside al-Nusra Front, al-Qa’ida in the Arabian Peninsula, al-Qa’ida, al-Shabab, the Houthis, ISIS, ISIS-Khorasan and the Taliban all as “Entities of Concern".

The rest countries that have been on the list under the International Religious Freedom Act of 1998 include: Burma, China, Eritrea, Iran, North Korea, Pakistan, Saudi Arabia, Tajikistan and Turkmenistan. The U.S. State Department said, "Nigeria trended negatively in 2018 adding that the Federal Government “failed to prevent or stop violence or hold perpetrators to account." The US Department of State also renewed the placement of Comoros, Russia and Uzbekistan on the Special Watch List (SWL).

Nigeria joined the list of SWL because of severe religious persecution, killings of Christians and burning of churches in the north, as well as, the clampdown on Islamic Movement in Nigeria (IMN) popularly known as Shiite Muslims. The USA Department explained: “These designations underscore the United States’ commitment to protect those who seek to exercise their freedom of religion or belief."

It is a welcome development that US asserts, “We believe that everyone, everywhere, at all times, should have the right to live according to the dictates of their conscience. We will continue to challenge state and non-state entities that seek to infringe upon those fundamental rights and to ensure they are held to account for their actions.” This is a very welcomed development.

A US-based human rights lawyer, Emmanuel Ogebe described the placement of Nigeria on the list as long overdue. He said the killings of Christians and burning of churches in the north were enough to penalize the President Muhammadu Buhari-led administration. According to him “We are happy to note that despite these shortcomings, the US government saw enough to escalate Nigeria’s designation to the penultimate Warning Watchlist."

The NSCEA said, "It has been repeated over and over that, “Nigeria is the most dangerous place in the world to be a Christian" and it is high time this is officially recognised and noted; so kudos to the U.S. Department of State who has placed Nigeria and six other countries on a watch-list over their approach to religious freedom." says Bishop Funmilayo Adesanya-Davies.

The NSCEA also learned that, "the US is launching an international alliance of countries for religious freedom early in the New Year." We believe that if countries like Nigeria agree to work to improve their standing by joining this alliance, it may help turn around the nation’s current negative ranking. Nigeria definitely needs a change, the terrorists have had enough of their time. It is enough.

Earlier in the week, "the Christian Association of Nigeria CAN has commended the U.S. for standing on the side of the oppressed and the truth" adding that, “the bitter truth is Christians are yet to be given any sense of belonging since this government came on board; and CAN welcomed the placing of the country on a special watch list by the U.S. President." President Muhammadu Buhari needs to give all citizens a sense of belonging, irrespective of their religious, tribal and political affiliations.

It is believed that the immediate inclusion of Nigeria on the list may not be unconnected with the continuous detention of the leader of the Islamic Movement if Nigeria, (IMN) Sheikh Ibrahim El-Zakzaky and the subsequent clashes between the Nigeria Police Force and IMN members. Bishop Mercy Olufunmilayo Adesanya-Davies, the Secretary of Elders Council, in her statement in Port Harcourt added that, "the Nigerian Christians community looks forward to a restructured Nigeria nation, where there would be peace, unity and progress in the nearest future."