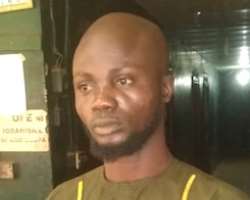 A 37-year-old man, Mutiu Sonola has been arrested by operatives of Ogun State police command for beating his 3-4-year-old wife, Zainab to death.

The suspect was arrested on Wednesday 25th of December 2019 following a report by the father of the deceased who complained at Ibara division that he was called on phone that his daughter was having a misunderstanding with her husband and that she has been beaten to comma by the husband.

He stated further that he ran to the place and rushed her daughter to General hospital Ijaye where the doctor confirmed her dead.

The Police Pubkic Relations Officer for the command, Abimbola Oyeyemi told the Nigerian Voice that the DPO of Ibara division police station, SP Dada Olusegun mobilized his detectives to the area and arrested the suspect.

The PPRO said the corpse of the deceased has been deposited at general hospital mortuary for autopsy.

The Commissioner of Police in the state, CP Kenneth Ebrimson ordered the immediate transfer of the suspect to homicide section of the State Criminal Investigation and Intelligence Department for further investigation and prosecution.