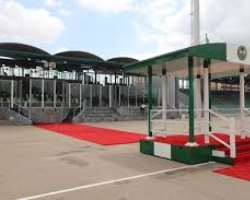 I remember Eagle Square and what happened there on the 29th of May, 1999. 20 years after, so many things have happened.

From Eagle Square where power changed hands in 1999, I have seen many who were present on that day but today, have been forgotten in idle permanent homes of their graves.

I remember how Nelson Mandela walked into the venue and the ovation that followed and with my same eyes I saw him in a casket.

I saw Stella Obasanjo rose to affluence and influence and with my eyes I saw her being driven out of power in a casket.

I saw Desire Kabilla who was also at Eagle Square fall to the bullets of his bodyguard in DR Congo. A former minister of health, Prof Ransome Kuti was buried.

I saw Chuba Okadigbo rose, fell and died. Abubakar Rimi and Alex Ekwueme who contested Presidential primaries with Obasanjo in 2003 at the same Eagle Square had their funerals organized.

I saw "almighty" Tony Anenih aka Mr Fix it, laid in-state helplessly in Benin as he couldn't fix death. Prof Dora Akunyili, the strong woman who was everywhere, fell in a hospital in India.

I saw "Evil Genius" begin to wear canvass shoes with agbada whilst in a wheelchair in Minna as he watches life without his once powerful wife, Maryam.

I saw a Sultan fall from the sky, the remains of the owner of Bolingo Hotel was seen at Lisa village.

Before my eyes Bola Ige fell, Suntai crashed and died, once landlords of Plateau and Taraba, Dariye and Nyame walked into prisons.

In my eyes, almighty Olabode George went and came out of prison. Justice Salami heard the news of the death of Justice Katsina Alu.

Before me, I saw powerful James Ibori who financed Yaradua's presidential election run like a coward to Dubai where he was extradited and jailed in UK.

In my eyes, a Landlord fell in Kwara and a strongman won election in Kogi but never lived to hear his victory announcement.

In my eyes, Azazi reigned and fell, Yakowa never lived to tell a story. Oronto Douglas who was once a powerful man behind the throne was buried.

In my eyes, Yar'adua came and fizzled out of power like two of his ministers.

In my eyes, I saw the strongman of Ibadan politics, Adedibu, who removed a whole sitting governor and made Obasanjo dash to Ibadan that same afternoon for peacemaking, rolled in a mat to the grave.

In my eyes, I saw Tompolo who was powerful under Goodluck Jonathan, demystified and chased into hiding never to return under Buhari.

In my eyes, Solomon Lar that sat that day as PDP Chairman, a symbol of power and affluence was buried on the plateau.

In my eyes, tested Bukola Saraki could not win his re-election and now hunted and his properties seized. This was a two time governor and number three man in Nigeria as Senate President now powerless.

While still alive, newspapers carried how once powerful men like Olisa Metuh, Dasuki, Kalu were all turned into vegetables by EFCC.

In my eyes, I saw strong men rise and fall very cheaply. If this writeup should teach us anything, let it be known that power is transient. God gives who he wants to give. He says "I will have mercy on whom I want to have mercy on".

To those of you today in power, any power, where would you be in the next twenty years?

In 2039, when names like Buhari, Atiku, Tinubu, Saraki, Ekweremadu, Abba Kyari, David Mark,Victor Ike Oye, Ahmed Lawan and many sitting Governors, PS, Directors, GM's and Leaders are mentioned what would a child write about them then?

As we approach life in 2020, have it in mind that POLITICAL ~_POWER_~ IS NOT PERMANENT. THIS SAME POLITICAL *POWER* HAS CONSUMED MEN, DESTROYED MARRIAGES, CUT SHORT DREAMS, ENDED RELATIONSHIPS, BETRAYED TRUSTS AND KILLED FELLOW HUMANS...