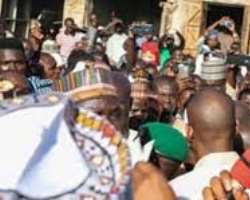 Following last week, 19 December 2019 serial attacks on some villages in Askira Uba LGA of Borno state by gunmen suspected to be members of the Boko Haram insurgents that have been terrorising the area for long despite security measures taken by the government.

Governor Babagana Umara Zulum of Borno state on arrival from Abuja at the Yola International airport moved down to Lassa, Chul, Rumingo, Kirdimdila, Mutukum and Hausari Zadama villages to sympathize with the victims and residents of the areas over the recent attacks on their communities by members of the Boko Haram insurgents last week.

The serial attacks left three people dead and scores of other villagers wounded while dozens of houses and shops were burnt down by the insurgents in all the villages.

The Governor also promised to reconstruct all the shops and houses burnt as well as construct houses for the IDPs displaced by the insurgents from the surrounding villages now on refuge with their relations and friends in Rumingo town and other places.

He similarly announced that government will after the Christmas season reconstruct all the burnt shops and stores as well as drill boreholes in the villages, renovate their schools and construct additional schools, expand their markets, and provided poverty alleviation as well as skills and vocational acquisition programmes in the areas to cushion their hardships and sufferings.

Governor Zulum further pledged to provide scholarships for students of the area and boost security services of the Vigilante Hunters in the area after providing them with patrol vehicles and allowances in complementing the efforts of the military in protecing lives and property of the citizenry.

He also directed the Ministry of. Works and Ministry of Reconstruction, Rehabilitation and Resettlement, RRR, to construct the road, reconstruct the schools and complete Lassa township Bridges and erosion control works started by the community and Federal Ministry of Environment.

The Deputy Speaker, BOSHA, Hon. Eng. Abdullahi Musa Askira commended the Govenror for his sympathy visit and concern to the people of Askira Uba LGA while appeling to the governor to continue to support and assist the victims of attacks.

Hon. Commissioner for Animal and Fisheries, Hon. Juliana Bitrus who conducted the governor round Lassa town hospital under renovation, Lassa bridge under construction and burnt shops and stores appreciated the sympathy visit and concern of the Govenror while commending his determination's willingness to support and assitst the people.

Highlights of the events include presentation of security patrol vehicles, facilities, allowances to vigilante groups and features to IDPs in Chul and Running villages among others.