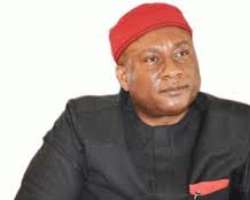 Chief Ezeife stated this at Igboukwu on Monday when leaders of Igbo Mandate Congress IMC led by Rev Obinna Akukwe paid him a working visit to find solution to the political misfortunes of Ndigbo . Chief Ezeife wondered why the anti-graft body has special leisure in harassing successful Igbo businessmen.

According to Dr Ezeife ‘’EFCC harassed Ibeto and later he was found to be innocent. They faced Innoson and the courts later proved that the man was innocent. They also descended on Ifeanyi Ubah and the man was subsequently freed.

‘’Why must EFCC seize his passport but to humiliate him. Allen Onyema is not the calibre of person that will run away’’

Dr Ezeife said that they are still investigating the whole affair and will make a statement at the right time.

Earlier, the Director General of Igbo Mandate Congress, Rev Obinna Akukwe had described seizing Allen Onyema’s passport s irresponsible. According to Rev Akukwe ‘’EFCC acted irresponsibly by seizing the passport of Air Peace Boss when they have not even done preliminary investigations. This man who has businesses across the world has just been prevented from overseeing his businesses because of a US Jury decision. EFCC should allow the man do his business and await extradition order first before harassing a fellow Nigerian’’

He said that EFCC should uncover the fraud first before intimidating anybody, including that of all other high profile persons in both APC and PDP .

Meanwhile information reaching Igbo Mandate Congress suggests that the Air Peace boss have maintained his innocence even as numerous Igbo leaders are waiting for EFCC's next move before daring the graft body on the issue.