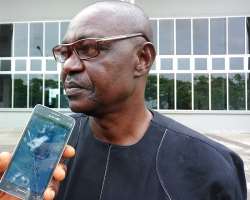 The Chairman of the Nigeria Labour Congress (NLC) Comrade Ben Ukpepi has been rescued by the Cross River State combined security force aka SCOLOMBO.

SCOLOMBO is a combined security force made up Army, Police, Navy, Civil Defence and other security agencies

Speaking with our correspondent via phone on Monday morning, the Permanent Secretary in charge of security in the Governor’s office, Dr Alfred Mboto confirmed the rescue.

“He was rescued on Sunday at about 9.15pm in Ikot Edem Odo in Akpabuyo, no ransom was paid. It was the combined security outfit of the state government called SCOLOMBO that secured his release.

“The state is safe, though we may have pockets of security problem, our security agencies are all over the places, we shall have peaceful Christmas and carnival celebrations. People should not be afraid of the anything, we are on top of every situation” he stated.

Also speaking via phone on Monday, the Police Public Relations Officer, DSP Irene Ugbo confirmed the rescued of the victim saying that he (NLC Chairman) was alive and healthy. “No ransom was paid. Though we have not arrested anybody, we are on the trail of them. Soon, we shall pick them up” she said.

Comrade Ukpepi was kidnapped on Tuesday night at his residence in Akpabuyo local government area of Cross River State and the Nigeria Labour Congress (NLC) on Saturday accused the Cross River State Governor, Prof Ben Ayade of not showing concern over the kidnap of its Chairman.

In a WhatsApp message issued and sent to the Permanent Secretary in charge of security, governor’s office, Calabar, Dr Alfred Mboto on Saturday, the Vice Chairman of NLC Comrade Lawrence Achuta had regretted the action of the State Governor.