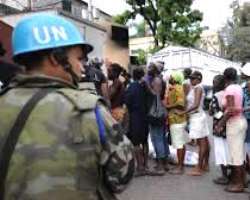 According to reports, the United Nations peacekeepers fathered children with women and girls in Haiti before abandoning the mothers to lives of poverty in the disaster-stricken Caribbean country, a new study says.

The mission was originally meant to assist Haiti with its political instability and organized crime, but was extended in 2010 following a major earthquake and again after Hurricane Matthew in 2016.

According to the U.S. media, the United Nations soldiers raped multiple children then leave them with babies. The Secretary-general António Guterres and allies like the U.S. Embassy, USAID, French Embassy, Canadian Embassy, UNICEF, WFP, UNDP, IMF, WORLD BANK, NED, NDI, IRI, The Vatican, U.S. Missionaries, and NGOs are all quiet about this situation. What's going on?

Researchers from Birmingham University and Queen’s University, Ontario, interviewed more than 2,500 Haitians for the study, of which 265 subjects – or about 10 percent – told stories of children fathered by UN personnel.

It said “girls as young as 11 were sexually abused and impregnated by peacekeepers and … ‘left in misery to raise their children alone.”

“They had sex with the girls not even for money, it’s just for food, for one meal,” a man from Port Salut told the researchers.

The Haitian-based Bureau des Avocats Internationaux (BAI) filed paternity suits in Haitian courts in January 2018 to secure child support payments on behalf of 10 children whose fathers are claimed to be UN peacekeepers. The BAI has slammed the UN as “non-responsive” and uncooperative.

"Sadly, I think it's not fair and unacceptable for the United Unions soldiers to do such horrible crimes then think they can get away with it. If the current President Jovenel Moise and PHTK are afraid to speak on this, I will speak about this so the criminals can be punished.", said Werley Nortreus, the founder of Ceraphin Corporation and Vanyan Sòlda Ayiti.