Can Fayose speak out? 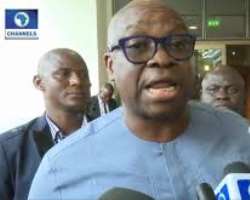 Former Governor Peter Ayodele Fayose made history in Ekiti state fondly known as the ‘Fountain of Knowledge’ for dislodging two incumbent governors at the 2003 and 2014 polls. He humbled the current Minister for Trade and Investment, Otunba Richard Niyi Adebayo in 2003 when he roundly defeated him when the former was seeking re-election. Fayose, the former Ibadan resident cashed in on a water crisis and acted as a Deux Machina by supplying the entire state water for close to three years which endeared him to the hapless masses who wondered why the urbane Adebayo couldn’t be bothered about their plight and instead preferred to be holed up in Lagos where he had numerous investments.

Upon being sworn in 2003, he never failed to regale the people with tales of how Adebayo mismanaged the finances of the state and continued the blame game which the beleaguered hoi polloi had to contend with as they had confused populism with readiness for good governance. He ran into trouble with former President Olusegun Obasanjo as he became a critic of his alleged third term agenda which was brewing at the time. Baba Iyabo as the two time former leader is fondly called wasted no time in setting the then newly formed Economic and Financial Crimes Commission (EFCC) headed by Nuhu Ribadu on him which probed the controversial poultry project for which it was established that he had allegedly dipped his hands in the public till. The State House of Assembly impeached him on the 14th of October, 2006 and so unpopular was he that his aides hurriedly ferried him out of the state in the back of an unmarked car with his head bowed in gargantuan shame.

Surprisingly, the EFCC didn’t follow up on the botched poultry case which made political pundits opine that the impeachment was politically motivated.

Oshoko as Fayose is fondly called relaunched himself back into the game that gave him fame by joining the Labour party and contested the 2011 Ekiti Central Senatorial election. He lost to Senator Babafemi Ojudu, the current political adviser to President Muhammadu Buhari which greatly demystified him.

Not one to give up easily and smarting from the defeat, he rejoined the Peoples Democratic Party (PDP) and sought to do the ‘impossible’ in dislodging Dr. Kayode Fayemi in the 2014 gubernatorial elections. Fayemi was initially popular but his determination to reform the state civil service which made him subject the civil servants to writing promotional examinations made him very unpopular and the bureaucrats waited patiently at the polls to extract their pound of flesh from the gap toothed governor.

In a twist of fate, he roundly lost to Fayose who defeated him in all the eighteen local governments of the state proving that it was no fluke. Oshoko was really back with a loud bang and his populist magic worked and swept the state like a wild harmattan.

No sooner had he settled down to the daunting task of governance that he repeated the mistake of 2003 by constantly criticizing the immediate past Fayemi led administration by blasting him for leading the state to unimaginable debt without providing viable alternatives in bringing the state back from the brink as the elected chief executive. He was more in the news for exchanging banters with roadside food vendors and eating roasted corn on the streets than for providing a template for good governance.

The 2015 general elections put his party in the opposition in the surprising defeat of former President Goodluck Ebele Jonathan and this transformed him into a voice of the opposition as he lent his loud voice to national issues especially that of the rampaging Fulani Herdsmen who were bent on taking over the entire South West at the time. He was constantly in the news baring his mind on issues of national importance and was very vocal in is criticism of the President Muhammadu Buhari led administration.

He gave verve to his party’s bid to transform itself from the largest party in the African continent into the country’s major opposition party. His criticism kept the government of the day on its toes as it frequently responded to them and transformed Oshoko into a major opposition figure.

He sought to become a godfather by attempting to install his deputy, Professor Kolapo Ishola as his successor but he was narrowly defeated by Fayemi who like him came back for the second time.

Since leaving office last year, he has been rather quiet and seems to have gone on political exile as the nation hasn’t been hearing his voice on pressing national issues. This is worrisome especially as the nation is fast sliding into dictatorship under Buhari with the opposition parties not doing enough to stem the ugly tide. At a critical time like this, his voice is greatly needed to keep the government on its toes and to greatly hold it to account.

One wonders why he suddenly went quiet especially after he declared his ambition to become President. Is he scared of the EFCC or has he lost interest in politics? His continued silence can only keep one guessing.

We urge him to be one of the few voices of the opposition that will enable the government at the centre fulfill its social contract to the people. He shouldn’t leave the nation in the lurch as we still need him around to pontificate to the Buhari led government as the voices in the opposition keep thinning out by the day.

Oshoko please come out and speak up loudly.
Tony Ademiluyi writes from Lagos and edits www.africanbard.com