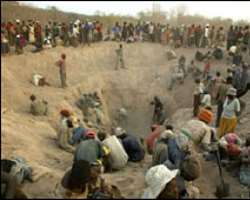 A judge in Zimbabwe has denied bail to a human rights activist accused of providing false information about the diamond trade.

The judge said Farai Maguwu, if convicted, would have committed “treacherous and abominable” crimes.

The ruling came as the body which oversees the trade in “blood diamonds” – from conflict zones – meets in Israel to decide whether to allow Zimbabwe to resume international sales.

Mr Maguwu was arrested on 3 June.
He had met a representative of the diamond trade body, the Kimberley Process.

Lobby group Human Rights Watch has urged the meeting in Israel not to allow Zimbabwe to resume the trade.

“They are working against the people of Zimbabwe. We are a principled country,” he said.

A leaked report suggested the ban on Zimbabwe's diamonds could be lifted at the meeting in Israel.

The army took over the Marange mines in the east of the country in 2008 and has since been accused of committing widespread abuses there – killing some 200 miners and forcing others to work in the mines.

Mr Maguwu's Centre for Research and Development has published several reports about the alleged abuses in Marange.

Judge Chinembiri Bhunu said “no-one has the right to publish false information or statements to the detriment of [an] other”.

“That kind of behaviour, if proved, is treacherous and abominable particularly in these times of national economic strife.”

Zimbabwe's army has denied the allegations.
In February, President Robert Mugabe threatened to leave the Kimberley Process after Zimbabwe was given until June to prove that its mines were properly run.

The Kimberley Process was set up in 2002 after the diamond trade was accused of fuelling several conflicts in Africa.