Get Used To It People, But This Too Shall Pass 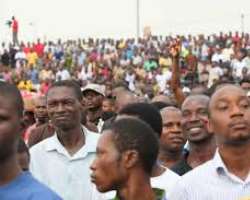 It took the slapdash re-arrest of online Publisher and comic revolution-monger Omoyele Sowore in a court of law of all places, for outraged people to realize that Nigerians now live under a dictatorship. A dictatorship so fearful of its own shadow and any mention of the word revolution, that it is willing to objectify the hapless Sowore as an example for other potential revolutionaries.

This is a dictatorship willing to deploy its security thugs to scuffle in a court of law as a way of intimidating judges as well as the general public who may still harbor the delusion that the rule of law exists in Nigeria. Ironically its fragile mandate stems from a proclamation of the highest court of the land whose leadership in a manner more befitting of accomplices, does not have the temerity to condemn the desecration of temples of justice under their jurisdiction.

Some of Nigeria’s finest writers and minds have openly voiced their disgust with the situation of things in the country including this brilliant opinion piece by Rotimi Fasan (https://www.vanguardngr.com/2019/12/general-buhari-must-bring-order-to-his-unruly-regime/).

But for the most part, these reactions are belated. The Dictator is now entrenched. His fawning acolytes are in charge of the National Assembly as well as the Judiciary. Not to mention the Military, all the Security Agencies and the Police. For the sake of their positions and personal welfare, they owe their allegiance to the personality of the Dictator and all that he stands for rather than to the Nigerian Constitution, Nigeria as a nation or even the taxpayer that sustains them.

The press and writers are of no consequence now. Some of them (Press) are probably wakened because they are sponsored by geo-political actors who have come to realize that there is no route for non-Fulanis or non-expansionist Fulanis for that matter, to occupy the Presidential Villa in Aso Rock, under prevailing dictatorial circumstances.

The python has wrapped itself around Nigeria and it is now aiming to swallow the head through Ruga 2.0. It is pertinent to warn Nigerians anew that if their State Governors foolishly cede their ancestral lands for Ruga 2.0, then and only then will they find themselves in the python's stomach.

In trying to avoid the pothole of open corruption which they ascribed to former Vice President Atiku Abubakar, Nigerians fell into the well-concealed gully of dictatorship and camouflaged corruption, most likely of mind-boggling magnitude, which they failed to ascribe to General Muhammadu Buhari and his acolytes. Only time will tell of course. And yes, Nigerians are now trying to figure a way to climb out.

Many are praying to God to throw a ladder of rescue into the current pit of despair. But Nigerians were warned severally by God using inspired people. Nigerians remained obstinate and adamant, because they thought they knew better, even though there were too many ominous signs and wonders.

But as Mick Mulvaney, Chief of Staff to Donald Trump famously said: 'Get over it.' Since living under dictatorship is the new norm and their chosen preference, maybe one should add, 'Get used to it people.'

Provided Nigerians vehemently resist the forced seizure and conversion of their ancestral lands for the resettlement of foreigners invited by General Buhari to come to Nigeria ostensibly to subdue them, there is hope yet.

People should recall that when General Buhari visited the President Trump at the White House many months ago, he ascribed the indiscriminate killing of indigenous Nigerians in Nigeria to foreigners armed by the late Libyan strongman Moammar Gadhafi. Without arresting and bringing to justice those foreign killers of Nigerians in Nigeria, General Buhari the Dictator, without seeking input from the National Assembly or the Nigerians he purports to lead, has unilaterally invited all manners of foreigners to come over and resettle themselves in Nigeria.

Despite all that, provided Nigerian ethnic nationalities do not cede their ethnic sovereignty over their ancestral lands, there is hope yet. There is hope because in the end, the People will outlive any Dictator. This too, this dictatorship shall pass. In what way and manner, only God knows for each mortal.