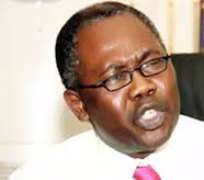 The immediate-past Attorney-General of the Federation and Minister of Justice, Mohammed Adoke (SAN), has been arrested in Abuja.

His lawyer, Chief Mike Ozekhome (SAN) in a short message sent to our correspondent, stated that the ex-minister was arrested moments after the aircraft which he boarded from Dubai, the United Arab Emirate, touched down at the Abuja airport.

“He was picked up at the foot of the aircraft by Interpol, refusing anyone access to him.

“He is believed to be on his way to the Interpol office at Area 10, Garki, Abuja,” Ozekhome stated.

The lawyer had said in an earlier statement that his client would voluntarily submit to the Economic and Financial Crimes Commission on arriving Nigeria.

Adoke, who had been on self-exile since the end of his tenure in 2015, was arrested in November by Interpol in Dubai over some pending charges in connection with the Malabu Oil deal in Nigeria.

He boarded a flight to Nigeria shortly after he was released from the Interpol custody in Dubai.