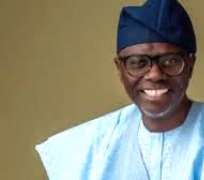 Nigeria’s apex court has unanimously endorsed the election of Babajide Sanwo-Olu as the Governor of Lagos State in the last gubernatorial election in the state.

The seven-member panel of the Supreme Court unanimously agreed that Sanwo-Olu was duly elected as governor of Lagos.

According to Galinje, the reliefs sought by the appellant did not fall within the ambit of the schedule of the electoral act.

He said the prayers sort before the court in an election matter were jurisdictional and must fall within the reliefs allowed by the law in section 138 of the electoral act.

Sanwo-Olu, through his Counsel, Victor Opara had approached the apex court to upturn the order of the Appeal Court to resume hearing in the Governorship Election Petitions Tribunal in Lagos State.

Chief Owolabi Salis, the governorship candidate of the Alliance for Democracy and his Labour Party counterpart, Ifagbemi Awamaridi had prayed the apex court to dismiss the appeal filed by the appellant and uphold the decision of the Appeal Court.

A five-man appellate court panel had held that the tribunal was wrong to have discontinued hearing on the basis that the AD and its governorship candidate, Salis had abandoned their petition.

“The case is to be remitted to the lower court for expeditious hearing of the matter,” the court held.

Similarly, it overturned the decision of the tribunal dismissing the petition filed by Ifagbemi Awamaridi, the governorship candidate of the Labour Party.

The appellate court ordered the return of the petition to the tribunal for expeditious determination.

The Election Petition Tribunal sitting in Ikeja, Lagos State, had in June dismissed a petition filed by the AD and LP parties challenging the victory of Sanwo-Olu at the March 9 election.