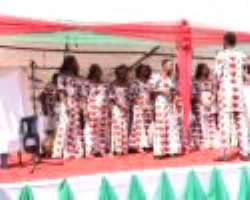 It was a colourful day of hymns, chants and merry, as Anambra Broadcasting Service (ABS) held her 2019 Festival of Carols and Nine Lessons.

The annual event which held at the ABS Headquarter Awka, the Anambra State Capital attracted many dignitaries, including religious leaders, media, music and movies personalities, traditional rulers, public office holders, and other members of the public.

Delivering a homily at the event, the Catholic Bishop of Awka Diocese, Most Rev. Paulinus Ezeokafor who spoke through a priest from the Diocese, Rev. Fr. Patrick Umezi, urged the participants to take the preparation for Christmas beyond a mere physical readiness into spiritual readiness, which according to him, is the primary reason for Christmas celebration.

He reminded the people of the meaning and significance of Christmas and called on everyone to embrace Jesus Christ, as no one can claim to be celebrating who he does not know or belong to. The event which was chaired by Chief Sunday Ezeobiora featured readings of the nine lessons, song renditions, raffle draw for management and staff of ABS, musical performances, and other activities which made the event colourful.

Addressing newsmen at the event, the MD/CEO of Anambra Newspapers and Printing Corporation, Sir Chuka Nnabuife described festival of carol and nine lessons as a staple in Christmas celebration, as well as the rite of readings that culminate in the birth of Jesus Christ, maintaining that its primary intent is to make people know the spiritual significance of Christmas and the circumstances that surrounded the birth of Christ.

In his vote of thanks, the MD/CEO of the ABS, Chief Uche Nworah, extolled Governor Willie Obiano's giant strides and effort in rebranding the organization to a world class standard, even as he eulogized the guests, participants and others who contributed in one way or the other towards the success of the 2019 event.

Others who spoke at the event, including veteran Nollywood actor, Chief Pete Edochie, the Traditional Ruler of Awka, Igwe Gibson Nwosu, Igwe Ben Emeka of Umueri, the member, representing Njikoka 2 Constituency, Hon. Pete Ibida, among others appreciated the participants, and wished them a successful and merry Christmas celebration.