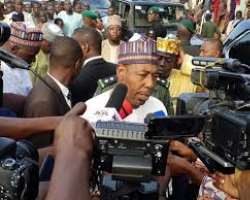 Governor Professor Babagana Umara Zulum of Borno State on Monday inuagurated a 42-man Borno State Anti-Trafficking in Persons Task Force (ATIPTF) to monitor, coordinate, manage, develop, mobilize and carry out activities to checkmate human trafficking, gender based violence and sexual abuse among others in the state.

Inuagurating the task force at the multi purpose hall of the Government House Maiduguri, Zulum said the Constitution of the anti human trafficking task force in the state was a clear demonstratioin of his administration to address cases of gender based violence, sexual abuse, prostitution, girls and women trafficking as well as cultism in the state.

He added that presently, the State House of Assembly was working out a bill to check issues of sexual abuse, prostitution, gender based violence, and other homicides while emphasizing the need to checkmate such crimes in the society in order to ensure the availability of free and safe society for girls and women.

The governor noted also that the porous borders surrounding the state such as Cameroon, Chad and Niger Republic also pose a great danger and influence human trafficking added to unemployment and insurgency.

He reaffirmed governments readiness and commitment to fight indecency and culpable crimes, stressing that, there are currently 31 cases pending in court of law while 152 cases have so far been prosecuted in competent court of law and judgements have been passed

Zulum urged members of the task force to put in their various experiences and knowledged in the discharge of their responsibilities without any fear or favour while congratulating the members and appealing to them to be dedicated , committed and carry out their assignments assiduously.

He also thanked the organizers and stakeholders for their support and participation in the setting up and inuaguration of the state anti human trafficking task force.

The Director General, National Agency For The Prohibition of Trafficking in Persons( NAPTIP,) , Mrs. Dame Julie Okoh-Donli said Borno State is the sixth state in the federation that the agency has inuagurated a task force in line with the requirements and Policy framework of the agency with a plan for all the 36 states and FCT to establish same task force.

" To effectively and efficiently enforce the anti human trafficking law and carry out campaigns as well mobilization agaunst human Trafficking in their states.

"The aim of the Constitution of state task force in each state of the federation was to enhance a comprehensive approach and strategy to promote capacity biuldung and human development"", Julie said.

The DG added that, it was to involve the state at all levels to participate and encourage community leaders , trade unions, CSOs, CBOs, NGOs, traditional rulers, labour union, allied or affiliated associations and others carry out the campaigns and mobilization against human trafficking and other gender based violence against women.

"I call on Nigerians to develop passion to work against all these crimes and violence, especially, the vulnerable," pointing out that, the task force was expected to promote support against human trafficking, develop, facilitate and coordinate strategies , plans and programmes for campaigns, mobilizing and aensitizng the society.

According to her, the task force was expected to access issues , adapt measures or comprehensive procedures to support lawful migration of people and carry out massive campaigns and mobilization against traffick in Persons, rape, sexual violence and other gender based violence , especially, in IDPs Camps and host communities .

Mr. Okoh-Donli added that th agency will liaise with the state governments to establish task force to root out traffick in Persons while tasking the task force team to render their reports periodically eveey quarter to the agency headquarters for assessment.

"I thank the state government for it's support for setting up the state task force in Borno",Juliei said.

Earlier, the UN Nigerian Deputy Humanitarian Coordinator, Mr. Peter Igaye in his remark said 80% of the population in the IDPs camps are girls and women and stand the chance to be Targets of human traffickers.

He assured that all the Humanitarian partners will continue to fuse their heads together and work together with NAPTIP to achieve it's objectives, noting that, the NGOs will ensure absolute safety and protection of the girl child and women.

The UN Deputy Coordinator however lamented on how in the past 10 years, innocent girls and women were conscripted and used as suicide bombers, abducted by insurgents, raped, forcefully married, tortured, miamed, killed, impregnated by the terrorists including those going to fetch firewood.

He pledged. that UN will support and work with the anti human trafficking task force in the sttate to succeed.