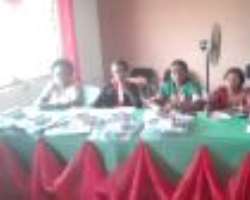 The grand finale of the 2019 spelling bee competition for library users and primary/secondary schools in Anambra State has ended in Awka, with the winners smiling home with mouth watering prizes and packages.

The competition which held over the weekend at the Prof. Kenneth Dike Central E-Library, Awka, was organized by the Anambra State Library Board in collaboration with the immediate past Commandant of the National Drug Law Enforcement Agency (NDLEA) Anambra State Command —Commander Sule Momodu, and attracted the participation of library users and school children from different parts of the state.

Speaking at the event, the Director, Anambra State Library Services, Dr. Nkechi Udeze said the objective of the exercise was to revive good reading culture and spirit of sportsmanship among the students and the youths, as well as inculcate in them, the ability to surmount challenges and withstand pressure, shock and other such things which have led many into committing suicide or indulging in all manner of anti social behaviours.

Appraising the students' performance in this year's competition as moderate, Dr. Udeze said "majority of them who won are library users, and we are hopeful that, with the prizes and counsel given to them, many of them have been inspired to start reading their books, and will do even much better next year."

Speaking further, she commended their partner, Commander Sule Momodu, who she disclosed, donated the laptops and some other prizes given to some of the winners in the competition, in addition to other laudable works he did before leaving the state on transfer.

In an interview with National Light, Commander Sule Momodu said his interest and objective for partnering with the library in such academic exercise was to engage the youths to use their time in something meaningful, rather than staying idle; as according to him, idle's man heart is a devil's workshop.

Congratulating the winners, and urging those who didn't win to prepare better for subsequent editions; the NDLEA helmsman further called on the well-meaning Ndi Anambra and other corporate or private organizations to emulate and sustain the gesture and other such things that would positively engage the youths and make them think positive towards becoming agents of positive change in the society, rather than dabbling in drug abuse and other social vices.

In their separate reactions, some of the facilitators of the event, including Miss Nneka Okoye, Mrs. Chinyere Muoto of the state's PPSSC, and Mrs. Nwabueze of the ASUBEB commended the organizers and congratulated the winners, while also calling on parents to encourage their children to read at least one book a day.

Brand new laptops, tablets, school bags, dictionary and other books were among the prizes given to the winners.

The 2019 spelling bee competition started in March 2019 and lasted till 14th December when the grand finale was held.