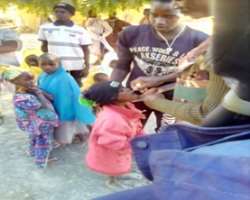 With sustained tenacity to rid the entire country of criminal elements for a safer and conducive environment, particularly as the Yuletide season approaches, troops of the Nigerian Army have continued to intensify their operations against all forms of criminality across the country.

In the North East Theatre of operations, troops of 5 Brigade in conjunction with elements of 5 Brigade Field Ambulance deployed at Damasak the administrative headquarters of Mobbar LGA of Borno State conducted a Free Medical Outreach and Immunisation Exercise on 12 December 2019 at North Wango Village of the same LGA. The Exercise is the brain child of the Chief of Army Staff, Lieutenant General Tukur Yusufu Buratai under the Buratai Intervention Task Force as a non-kinetic engagement by troops of Operation LAFIYA DOLE to compliment both governmental and non-governmental agencies in real - time health delivery to communities in the North East theatre of operation.

During the exercise, a total of 207 children were immunized with Polio vaccine while 122 adults equally benefitted from the Free Medical Outreach which include, medical consultations, health advisory, diagnosis, administration of drugs, eye test and distribution of free medical eye glasses among others.

In another development, troops of 68/94 Battalions deployed at Malam Fatori in Abadam LGA of Borno State conducted a successful Ambush Operation at a Boko Haram crossing point on 15 December 2019. The troops came in contact with some marauding Boko Haram criminals and instinctively engaged them with superior fire power that sent the criminals scampering in disarray, many of them with varying degrees of gunshot wounds. The unrelenting troops immediately went on a hot pursuit and recovered one body of a Boko Haram insurgent and several fragments of the criminals’ equipment shattered by the troops’ Rocket Propelled Gun fire along the criminals’ withdrawal route.

Similarly, troops of 251 Task Force Battalion deployed at Njimtilo Check Point in Konduga LGA of Borno State while conducting a Stop and Search operation on 9 December 2019 arrested one Boko Haram Logistics Supplier, Umar Rawa Gana who was conveying 300 cartons of engine oil intended for delivery to Boko Haram criminals. Equally, on 11 December 2019, troops of 195 Battalion deployed at Kadamari in Jere LGA of Borno State arrested a Boko Haram criminal, Kabiru Bana Chulu around Ladin Mbuta general area of same LG. During preliminary interrogation, the suspect confessed to being in possession of quantities of military camouflage uniforms which are criminally used by the insurgents.

In another development, on 10 December 2019, troops of 22 Brigade Garrison deployed at Dikwa in Dikwa LGA of Borno State while on a road clearance operations recovered one Rocket Propelled Gun bomb and one 36 Hand Grenade abandoned by Boko Haram criminals. However, the Unexploded Ordnance was safely detonated by the Explosive Ordnance Device Team of the Brigade.

Relatedly, troops on Operation MESA promptly responded to a distress call relating to an armed robbery incident on 8 December 2019 along Danwal – Haita in Riyom LGA of Plateau State. Unfortunately, the robbers had abandoned the location before the troops’ arrival. Nevertheless, troops exploited the general area and arrested one Pam Emmanuel. Preliminary investigation reveals that the suspect is an informant to the criminals operating in the area. Similarly, same troops in conjunction with personnel of Department of State Service conducted a successful raid operation on 9 December 2019 at a cultist hideout in a hotel at Etto Baba, Angwan Rukuba in Jos North LGA of Plateau State. During the operation, 10 suspects comprising 8 males and 2 females were arrested with some quantities of substance suspected to be Cannabis Sativa.

Additionally, on 9 December 2019, the troops conducted a sting operation based on reliable information and arrested 2 notorious armed robbers namely Eze Emema and Ifeanyi Ordu at Guralandok Junction of Rukuba in Jos North LGA of Plateau State. Suspects are believed to be part of the armed robbery gang that robbed one Mr Silas Dung and have been terrorising the general area.

In the South West and South South regions, troops on Exercise CROCODILE SMILE IV continue to emasculate criminal elements by denying them respite across the regions.

In another incidence, troops of 4 Brigade Garrison under Exercise CROCODILE SMILE IV on 10 December 2019 trailed a notorious armed robbery gang who have been terrorising Oghehe Community in Ikpoba – Okha LGA of Edo State. Resulting from the operation, 3 suspects were arrested and one cut to size gun with 5 live cartridges were recovered from the criminals. Relatedly, on 9 December 2019, troops of 343 Artillery Regiment on Exercise CROCODILE SMILE IV acting on reliable information, trailed and arrested one Mrs Tiebiye Adama (a community health worker) at Oluasiri Community in Ogbia LGA of Bayelsa State. Preliminary investigation reveals that the suspect has been involved in the treatment of militants with gunshot wounds after they escape encounter with troops.

In the North Central region, troops of Guards Brigade on Exercise AYEM AKPATUMA II conducted a patrol to Majaga Village in Toto LGA of Nassarawa State where some bandits were believed to be hibernating. During the night operation, 3 suspected bandits were arrested in possession of 3 Dane guns, live cartridges and charms. Relatedly, troops of Army Headquarters Garrison conducted a raid operation on 10 December 2019 at Bannex Plaza and Wuse II in Abuja Federal Capital Territory. Accordingly, troops arrested one notorious drug dealer, Ukasha Usman along with 13 other suspects in possession of large quantities of various types of illicit drugs.

In the South East region, troops of 144 Battalion (Rear) on Exercise ATILOGU UDO 1 promptly responded to a distress call on 11 December 2019 at GLO Office, Azikwe Street in Aba North LGA of Abia State. In another classical case of superb inter-agency solidarity and cooperation, it was revealed that 4 hoodlums reportedly attacked an Inspector of the Nigeria Police from 28 Mobile Police Squadron, Umuahia who was on duty at the GLO Office and took away his AK 47 Rifle with 29 rounds of 7.62mm Special ammunition. The gallant troops pursued the escaping criminals, rescued the policeman and arrested one of the criminals named, Lawrence Obinna. Additionally, troops recovered the AK 47 Rifle with the 29 rounds of ammunition, a black Passat Wagon car with Registration Number GWB 547 AA ABIA and other personal belongings.

The Chief of Army Staff, Lieutenant General Tukur Yusufu Buratai wishes to reassure the good citizens of our country the Nigerian Army’s unwavering resolve to protect lives and properties of all law abiding citizens. He however requests for the continuous support and understanding of all Nigerians in the conduct of Nigerian Army operations across the Country.