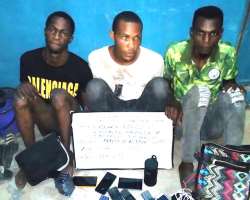 Three members of a robbery syndicate that robbed a private hospital at Omolaja Odunbaku street Oremeji area of Ibafo in Obafemi Owode local government area of Ogun state have been arrested by police.

The suspects, Folarin Azeez, aka Hyper Temitope Bolariwa, aka Tincan and Kolade Ahmed were arrested following a distress call received from police emergency centre that armed robbers invaded the hospital and dispossessed patients in the hospital of their belongings.

The Police Public Relations Officer for the Command, DSP Abimbola Oyeyemi told The Nigerian Voice that the DPO of Ibafo division, SP Abiodun Ayinde led policemen to the scene and that the suspects escaped through the nearby bush.

He added that "The policemen didn't relent in their efforts to apprehend the hoodlums. The efforts paid off on the 12th of December 2019 when intelligence investigation revealed that the hoodlums were hibernating somewhere in shimawa area."

"The DPO and his operatives moved to the area where the three suspects were subsequently apprehended", Oyeyemi explained.

He said items recovered from the suspects include 12 different types of Android and iPhones as well as wrist watches which the victims later identified as their robbed property.

The Commissioner of Police, CP Kenneth Ebrimson ordered the immediate transfer of the suspects to special anti robbery squad (SARS) for an in depth investigation into their various robbery activities.