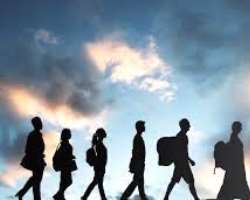 I recall seeing the 1984 Don’t check out Andrew advert which was played by the late Enebeli Elebuwa. In the advert, the country was pleading with him not to migrate out of the country and stay behind to develop here. In a tinge of coincidence, Major-General Muhammadu Buhari was the then Head of State and he is tragically currently our President at the moment.

Migration is as old as man and he has every right to leave his current country for greener pasture elsewhere. Pardon me by going Biblical. In the book of Genesis, God told Abraham to leave his father’s land to a land he would show him. Lot his nephew also left his homestead and settled in the land of Sodom and Gomorrah because of its rich pasture.

The first wave of migration from Africa was during the Trans-Atlantic slave trade when cheap labour from Africa was needed to power the plantations of the United States and the Caribbean.

In the run up to independence, most Africans studied in France, United Kingdom, United States and Canada most especially and immediately rushed home to occupy the vacant positions being left behind by the departing colonial masters.

After decades of terrible governance by both military and civilian rulers, the conversation shifted to migrating to the west for economic reasons and to give the family and unborn generations a brighter future.

The United States during the Presidency of Bill Clinton came up with the US Visa lottery and a specific quota for each country. Many Africans migrated through that means as it represented a way out of the biting pangs of raw hunger and poverty no thanks to the decadent and corrupt local leadership.

It wasn’t only the west that was attractive – many Africans ran to Asia and even other parts of Africa most notably South Africa just to have the taste of a better life.

The professionals were the worst hit. Many academics, doctors, lawyers, journalists, nurses and other healthcare professionals, accountants, bankers simply packed up their bags and fled the continent to avoid depression.

A recent report released by the Nigerian Medical Association showed that out of seventy-two thousand registered Nigerian Medical Doctors licensed to practice in the country; about thirty-five thousand were abroad. A similar release by other professionals like lawyers and accountants showed that the nation which touts itself as the ‘Giant of Africa’ is in real danger. A similar fate also befell other African nations as the conducive environment to thrive back home is simply not there which makes migration an inevitable option.

The west is complicit in the pathetic migration story of Africa. They provided their banking facilities for African dictators to stash away their looted funds which they not only used to develop their countries but also most times lost when they died. Another way was in their pressure to get hitherto Sovereign African nations to take loans from the Bretton Woods Institutions – the International Bank for Reconstruction and Development a.k.a the World Bank and the International Monetary Fund which always crippled the economies of these third world nations forcing the best of her nationals to seek economic asylum and fulfillment in faraway climes.

The contributions made to the economies of these Africans in Diaspora runs into hundreds of billions of dollars annually as the heart of most of them it still back home in backward Africa. Many of the children born abroad are still taught the language of the land of their original descent especially if both parents are from the same tribe. Many still take their children on visits back home to better appreciate where they ought to have been born and bred but for corrupt political leadership.

The damage has been done and there is no need crying over spilt milk or spilt blood as a bosom friend of mine would sometimes say. Many African nations are making strident steps to become developed states. A case in that readily comes to mind is Rwanda that is on the path of development barely after twenty-five years of the brutal Hutu-Tutsi war that claimed millions of lives. They are the first African nations to possess drones and are making great strides in STEM education with investors flocking to the former war torn nation like bees do to honey. They have a full fledged office for Diaspora affairs and regularly engage with their citizens abroad who are making serious investments back home. Other African nations should emulate them as they are poised to be Africa’s first super power in the no distant future.

Africa nations should get their act together in churning out progressive policies that would not only get them out of the woods but put them on the path of national development. We should shoulder high above tribalism and ethnic sentiments to building a virile economy for the good of all.

Many African States are artificial creations of the west and there is the need for a Sovereign National Conference to discuss on the way forward so that lasting pace and development can berth there.

Africa is truly in need of the clones of Nelson Mandela in her bid to develop.