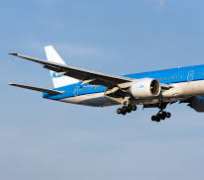 KLM Passengers that departed Lagos airport on the evening of 12th December 2019 to various destinations via the carrier's main hub, Amsterdam are yet to receive their checked in luggages. The Boeing 777-200 flight number KL 588 departed Murtala Muhammed International Airport, Lagos at 11:05 Pm and arrived Amsterdam Airport at about 05:55 AM on the 13th December 2019.

On arrival, the airline officials handed a paper to all passengers of the flight, informing them that their luggages did not accompany the flight because of operational failure at Lagos airport. They were however, asked to submit their final destination address for prompt delivery as the luggages arrive. A very worried passenger whose final destination is Washington, USA has threatened a legal suit as perishable items in his luggage are expected to have gone bad before it's arrival. KLM, one of the best foreign airlines that operate in Nigeria is yet to issue official statement on the isolated incident

Today makes it the third day of the flight and yet the luggages are still being expected. This is happening against the backdrop of recent government hard stand on Turkish Airlines whose passengers arrived without their luggages. The Minister of Aviation, Hadi Sirika has pledged to deal with any airline that threat Nigerians with disdain.