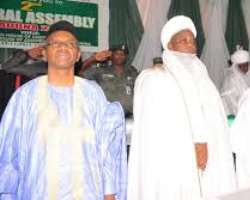 During the British colonial rule, the agitation for independence was largely a southern affair. The southerners who had the earlier benefit of western education courtesy of the noble activities of the missionaries largely spearheaded the agitation for self rule. The first broad based political party – Nigerian National Democratic Party (NNDP) was founded by Herbert Macualay in 1923 in Lagos which was the hot bed of the nation’s political activities.

Franchise was limited to Lagos and Calabar because the colonialists were aware of the nationalism springing up from these two cities especially in the former.

The Nigerian Youth Movement which was founded in 1934 and ended the dominance of the NNDP in 1938 by winning all the seats in the Lagos council elections that year, the National Council for Nigeria and the Camerouns (NCNC) co founded by Macualay and Nnamdi Azikiwe in 1944 and the Action Group founded by Chief Obafemi Awolowo in 1951 were all southern parties.

There were only two northern political parties in pre-independence Nigeria – the Northern Peoples Congress (NPC) which was founded by Alhaji Sir Ahmadu Bello and the Northern Elements Progressive Union (NEPU) founded by Alhaji Aminu Kano. The former was for the conservative elements in the then northern region while the latter was for the masses of the north. Both weren’t nationalistic in outlook. In fact the NPC blocked the independence motion in 1953 when Chief Anthony Enahoro of the Action Group moved the motion for it for 1956.

The indirect rule which the British adopted worked best in the north and so when independence came in 1960 it was the reward time for them. The cunning Brits ensured that the north based on its population size had half of the seats in the parliament which made it impossible for either the Action Group or NCNC to win without a coalition government. The mistrust between Zik and Awo made it impossible for any of them to become the nation’s Prime Minister when the Union Jack was lowered on September 30th that year.

The north had the distinction of a non nationalist becoming the country’s prime minister and the sense of entitlement when it came to the issue of political leadership sprung up. The slogan ‘born to rule’ soon emanated with many northerners carrying on with the swagger of 19th century warlords.

They have ruled the nation for most part of independence with the irony of being the least developed zone in the country especially the North East which has been badly hit by the boko haram insurgency.

When Buhari came to power in 2015, he allegedly plagiarized a line ‘I belong to everybody and to nobody.’ His apologists screamed to the High Heavens that he was non tribal and a reformed democrat who had consistently contested elections four times before his surprise victory in defeating an incumbent.

Action speaks louder than words the age-long aphorism goes and it wasn’t long before Sai Baba as he is fondly called began to reveal his true colour.

The appointment of Dr. Ibe Kachikwu as the Group Managing Director of the Nigerian National Petroleum Corporation (NNPC) was widely celebrated not only by the stakeholders but by many Nigerians in general. He had his Masters and Doctorate Degree from the world’s best educational institution – Harvard and was a topshot in America’s largest oil and gas company and one of the nation’s largest international oil companies, Exxon Mobil. Barely a year after, he was eased out of the government owned corporation for a northerner, Maikanti Baru.

The immediate past Boss of the Federal Inland Revenue Service (FIRS), Babatunde Fowler revolutionalized the tax administration in the country. He increased the revenue base from three trillion annually to over eight trillion a year. He expanded the tax net to include the taxation of companies operating in the digital space which were hitherto left untaxed. What was his reward? An infamous query by Abba Kyari, the powerful northern chief of staff who is arguably one of the most visible faces of the cabal and his replacement by Muhammed Nami, a northern tax consultant.

Dr. Muiz Banire SAN, a cerebral legal luminary and former academic was the Chairman of the Assets Management Company of Nigeria (AMCON). He combined both town and gown as he was at home in politics and legal practice. He was also the legal adviser to the APC. When his tenure came to an end, he was replaced by a northerner, Edward Adamu.

After the resignation of Mrs. Kemi Adeosun as the minister for finance, she was replaced by a northerner, Zainab Ahmed. Not only that the finance ministry was expanded to include that of budget and national planning vacated by another southerner, Senator Udoma Udo Udoma. After the controversial and unceremonious sacking of former Chief Justice of Nigeria, Justice Walter Onnoghen from office, a northerner, Justice Tanko Mohammed immediately succeeded him despite the presence of many southern Justices of the Supreme Court who were eminently qualified.

Most of the service chiefs are from the north as well in spite of the fact that many southern military officers have performed creditably well in foreign peace keeping missions and could be the solution to the boko haram insurgency that has defied all solutions at the moment.

The northernization agenda has given the verve to secessionist agendas most notably that of the Indigenous Peoples Republic of Biafra (IPOB) being spearheaded by Mazi Nnamdi Kanu who was forced to jump bail and flee abroad on a self imposed exile. There are cries for an Oduduwa Republic though not as loud as that of IPOB. The former Niger Delta militants have threatened to return to the creeks to take up arms and the entire nation is in a gargantuan mess because of the fear of ethnic domination.

I make a loud call for Buhari to critically and urgently review his appointments as they aren’t reflective of the federal character which the 1999 constitution enshrines to ensure balance. He shouldn’t give the impression that his region is the best while the others should be contented with the crumbs that fall from the master’s table.

To forestall another needless ethnic agitation, he should do the needful by being fair and just in the spread of his political appointments. We have so many challenges on our hands; we can’t afford another clone of IPOB to pop out from marginalized groups.