“Everyone must be law-abiding in the interest of national development.”
By The Nigerian Voice 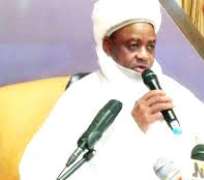 The Sultan of Sokoto and President-General of the Nigerian Supreme Council for Islamic Affairs, Alhaji Sa’ad Abubakar, has warned that disobedience to any court order is a recipe for lawlessness and chaos.

In a veiled reference to the arrest of the #RevolutionNow Convener, Omoyele Sowore, by the Department of State Services in violation of a court order, Abubakar stated: “Everyone must be law-abiding in the interest of national development.”

He gave the warning on Thursday in Abuja at the 2019 fourth quarter meeting of the Nigeria Inter-Religious Council, with the theme: “Religion and civil authorities in dialogue for nation-building.”

The monarch said: “We must regularly obey and respect the laws of our land. We should never disregard the laws to avoid the consequences. If a court makes a judicial pronouncement on a particular matter, it should be obeyed to the letter.

“If you are served a court order and you deliberately refuse to obey it because you are a governor, president or any influential person, then you are setting a dangerous precedent.

“There’s no society that will prosper through lawlessness; citizens must be law-abiding so that we can achieve the desired development.”

The NSCIA President-General also stressed the need for inter-religious dialogue in the country, noting that it would foster a better understanding among the people.

The Secretary to the Government of the Federation, Boss Mustapha, commended the co-chairmen and members of the NIREC for being steadfast in maintaining the peace and harmony in the country.

He said the Federal Government recognised the efforts of NIREC in bringing the two major religions together and providing religious leaders and traditional rulers a veritable forum to promote greater interaction and understanding among the leaders and their followers.

This, Mustapha noted, would lay foundations for sustainable peace and religious harmony in the country.

The SGF stated: “The time has now come for governments at all levels to sit down and discuss the issue of religious tolerance and peaceful coexistence with our religious and traditional rulers because the success or failure of security administration in the country depends largely on both institutions.

“You, therefore, remain in the frontline of stakeholders in the business of peacebuilding in every community.”