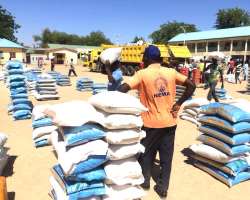 NEMA has commenced it's monthly distribution of food and other items to IDPs in Borno state to enable them have partake in the yuletide period.

The Agency has so far completed distribution to the IDPs at Farm Centre Camp, Custom House 1 & 2 Thursday.

The Leader of NEMA Intervention Team in Borno State, Navy Captain Manga Salisu Danjuma said that the IDPs at Mogcolis camp received their month of November 2019 food on the 20 November and are due for the month of December 2019 ration on 20th December.

However, to ensure the IDPs get food to celebrate the fast coming festivity, the Director General, Eng Mustapha Yunusa Maihaja directed that the December intervention commenced earlier.

The items distributed include Rice, beans and condiments comprising of tomatoes, seasoning, salt and cooking oil.