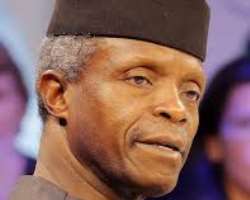 Most Christians are familiar with the story of Pontius Pilate who was convinced that Jesus Christ was innocent of all the allegations that the Pharisees’ leveled against him but was too timid and scared to protect him from being murdered by the blood thirsty religious fanatics. He then publicly washed his hands off the blood of Christ before offering him to be scourged at the pillar.

History repeats itself because man in his usual frailty learns the stories but never the salient lessons. More than two thousand years later, our own Vice-President Professor Yemi Osinbajo is surreptitiously following the footsteps of the former Roman Governor, Pilate.

The Wole Soyinka Centre for Investigative Journalism gave him an award for being a defender of anti-corruption which he turned down. His reason was that it was in protest of the way and manner the Department for State Security (DSS) re-arrested the Publisher of Sahara Reporters and anti-corruption and human rights crusader, Omoyele Sowore.

This is extremely ridiculous as it shows that he isn’t a man of true convictions who can defend what he believes in and not caring whose ox is gored. Why didn’t he publicly criticize the DSS for acting like the goons of Adolf Hitler when Sowore was re-arrested? Why has he not been public about the disobedience of the court orders by his boss and principal? The Heavens wouldn’t fall if he offers to resign in protest against the lack of respect of the rule of law by his boss – it will rather permanently etch his name in gold and in the hearts of his countrymen for generations to come.

Like the Biblical Nicodemus who was afraid to meet Jesus Christ his Lord and Master during the day time for fear of a reprimand from his fellow Pharisees, our Vice-President prefers to communicate his displeasure at the actions of the government that he is part and parcel of through the turning down of awards. How hilarious and ludicrous!

In the 19thcentury United States of America, the country was deeply divided over the slavery issue. The north with its large industrial base didn’t support slavery as they needed freeborn individuals to work in their factories. The south on the other hand had its economic power base in the plantations and so needed slaves to power their economy as the latter was far cheaper than hiring free men to work there. The then President Andrew Jackson opposed slavery on the grounds of both immorality and the fact that he was a northerner so he had to represent his peoples’ interest. His Vice-President John .C. Calhoun on the other hand was a southerner who sturdily backed slavery. A speech in opposition of slavery was made by Jackson. Calhoun not only made an opposing speech to his boss, he resigned on the spot and returned back to the south to lead the pro-slavery movement there.

The current British Prime Minister, Boris Johnson resigned as the Foreign Secretary under Theresa May because they later had divergent views as to the application of brexit. Johnson wanted an immediate exit of the UK from the EU while his former boss wanted more time so it could happen more naturally. A clash ensued and Johnson threw in the towel.

Coming down home in Nigeria, Air Commodore Ebitu Ukiwe resigned as the Chief of General Staff in 1986 when the then regime led by Ibrahim Badamosi Babangida wanted to take Nigeria – a supposed secular state into the Organization of Islamic Countries (OIC).

I can go on and on with the examples of leaders who resigned when there was a principle clash between what they believed in and what the government they were serving in.

Why does Osinbajo want to eat his cake and have it? As a Law Professor and Senior Advocate of Nigeria, it’s a monumental shame that he cannot openly speak up against the desecrated act of the DSS which borders on human rights and the rule of law which he swore to uphold as an officer in the temple of justice. His powers have been greatly whittled down as he is no longer in charge of the management of the economy; his aides were fired without his consent. What else is he looking for? Is he so obsessed with the title of vice-president that it has beclouded his good sense of thinking and judgement? Has he no honour left in him to heed to the Shakesperean advice that one should leave the stage while the ovation is loudest? In this case, it is even at its lowest ebb so what more is he looking for when he is now worse than an object of ridicule?

History will be extremely kind to Osinbajo if he can tow the path of honour to do the needful by resigning as his body language is no longer in alliance with the government he serves. Never in the history of this nation has a vice-president been so emasculated!

It is tragic if he ends up like Pontius Pilate or Nicodemus in his communication with his boss and the government he serves in since he lacks the moral fibre and courage to do the needful by exiting it.

How are the mighty fallen!
Tony Ademiluyi writes from Lagos and edits www.africanbard.com