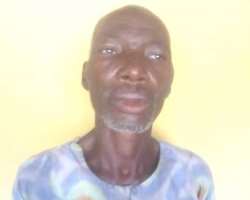 A 60-year-old man, Taofeek Shotayo has been arrested by men of Ogun State Police Command for defiling a ten year old girl.

The suspect was arrested following a complaint lodged at Aregbe police station by the step father of the victim.

He said the suspect who is his neighbour at Abule Aro area of Obantoko Abeokuta lured his step daughter to his room with N600 and defiled her.

The complainant further stated that he got to know when he noticed sudden change in the behavior of the little girl, which prompted him and her mother to question her intensively.

He said the victim narrated how the randy old man slept with her after given her N600.

The girl further disclosed that the man has slept with her twice.

He said "Upon the report, the DPO Aregbe division, DSP Ope Olasunkanmi detailed his detectives to the scene where the suspect was promptly arrested.

The PPRO told The Nigerian Voice that the suspect has made confessional statement to the police.

Oyeyemi said the victim was taken to the hospital for medical attention and that she undergoing treatment.

The Commissioner of Police in the state, CP Kenneth Ebrimson ordered that the suspect be transferred to Anti-human trafficking and child labour unit of the State Criminal investigation and intelligence department for further investigation and prosecution.