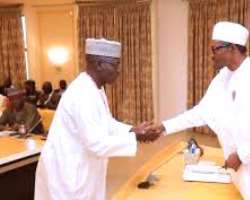 President Muhammadu Buhari on Tuesday requested the Senate to confirm the appointment of Muhammad Mamman Nami, from North Central, as the new Executive Chairman of the Federal Inland Revenue Service (FIRS).

Buhari also asked the Senate to confirm the nomination of Edward Lametek Adamu, as the Chairman of the Asset Management Corporation of Nigeria (AMCON).

Buhari also named other members of the board of the FIRS in his letter.

The representatives of the Ministries, Departments and Agencies (MDAs) also named by the President are Ladidi Bara’atu Mohammed (Office of the Attorney-General of the Federation), Godwin Emefiele (Central Bank of Nigeria) and Fatima Z. Hayatu (Ministry of Finance).

It could be recalled that President Buhari on Monday named a tax consultant, Nami, as the new chairman of the FIRS.

This followed the expiration of the tenure of Babatunde Fowler.

Fowler has since handed over the affairs of the FIRS to the most senior director in the agency pending the confirmation of Nami and other members of the FIRS’ board by the Senate.