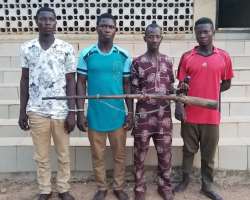 Men of Ogun State Police Command have arrested four hoodlums for allegedly shooting a cattle herder at Odeda area of the state.

The Nigerian Voice gathered that the hoodlums attacked the man in front of Iporo Fadipe Community High School and shot him.

The DPO of Odeda Division, CSP Williams Ajayi mobilized his men to the scene to rescue the man and apprehend the attackers

The Police Public Relations Officer for the Command, DSP Amimbola Oyeyemi said the policemen met the victim in the pool of his blood.

According to the PPRO, "He was quickly rushed to the hospital for medical treatment while effort was intensified to get the suspects arrested."

The Police spokesman said the dane gun with which the victim was shot was also recovered from the suspects.

He added that the suspects have all made confessional statements to the police.

Oyeyemi said the victim is responding very well to treatment in the hospital at an undisclosed hospital.