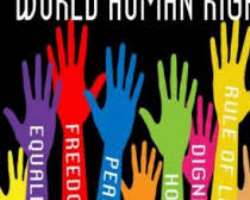 Onitsha, Eastern Nigeria, Tuesday 10th Dec 2019-The state of human rights in Nigeria including the hallowed principles of democracy and rule of law has degraded and retrogressed badly to the extent that many particularly the ‘human rights champions’, democratic forces and institutions have abandoned human rights for state terrorism, Int’l Society for Civil Liberties & Rule of Law, said today in a special statement marking the 71st anniversary of the World Human Rights Day (UDHR).

State terrorism and repression have reduced these human rights champions to ‘talk show activists’; speaking grammars without authorities or intellectual reference points. Normally, defense of human rights is not mixed with politics, except strategic partnership where necessary, but in Nigeria of today, many human rights champions are deeply and intricately involved in state or federal politics; speaking as ‘human rights activists’ in the day, but as ‘politicians’ at night or both in the day and night. Many of them who claim to be going to the equity with clean hands, are also not clean; thereby rubbishing themselves as ‘human rights champions’ and endangering defense of human rights and forcing the agents of state terrorism and repression to mindlessly and rapaciously threaten and undermine same in the country, Emeka Umeagbalasi, a Criminologist and head of Intersociety said

The state of human rights has so failed and degraded in Nigeria that other than social media and social gathering talk shows, ‘indigenized’ or local credible research works or reports on human rights particularly ‘civil and political rights’ including ‘state of democracy and rule of law’ reports; are no longer readily conducted and available in the country. Going by independent checks, there are not less than 60,000 federally registered nongovernmental rights groups in Nigeria, supposedly working for or campaigning on the constitutionally and universally recognized ‘four generations of human rights’ in the country.

Therefore, State Terrorism is taking to meanillegitimate policies and conducts and other illegalities and atrocities perpetrated by a sitting government against unarmed, defenseless and unprotected citizens of particular social grouping(s) or larger citizens of the country; all done outside domestic rights norms and international laws; perpetrated for hate, repressive, racial or ethnic, political and religious purposes.

State terrorism leads to Grisly Rights Abuses, regarded as ‘industrial scale’ abuses and violations by state actors of the four generations of human rights, particularly ‘civil and political rights’; capable of forcing widespread citizens’ radicalization and plunging the wider part of the country into ‘complex humanitarian emergencies’ or devastating and intractable violent conflict. The latter is not ruled out in the country or any part thereof, unless extreme care is taken.

The major remote factor fueling the ‘industrial scale’ rights abuses and violations in Nigeria through state terrorism and repression is ‘politics and policies of ethnicity and religion’, promoted maximally by the present central Government of Muhammadu Buhari and Yemi Osinbajo. Many critics still hold a strong belief that the Government is on pursuit of ethno-religious vendetta and not to govern the country pluralistically well. Since the mid 2015, Nigeria had been held down by ‘politics and policies’ of vendetta, vindictiveness; clannishness and ethno-religious bigotry.

For instance, it is still a popular belief in several social clusters across the country that the major remote reason for proscribing IPOB and declaring same “a terrorist organization” is ‘nothing short of pursuit of ethnic vendetta or “for purpose of revenging for declaring Boko Haram a terror group under the Jonathan Government”. Despite the fact that the Igbo Nation had not produced any executive president of Nigeria since independence in 1960, the Ethnic Nationality is presently visited with unspeakable policies and politics of ‘cultural violence’ or racial profiling/hatred or criminal labeling; ‘structural violence’ or political exclusion and segregation; and ‘physical violence’ or grisly and large scale massacre of her defenseless natives by lopsidedly composed coercive state actors.

These hash policies and politics are targeted at the Ethnic Nationality in revenge for ‘issues’ the Northern oligarchs believed they had with former President Goodluck Jonathan, an Ijaw man whose tribe migrated and settled in Nigeria between 500AD-650AD; as against the Igbo People who migrated and settled as far back as about 1,450BC (Emeka Umeagbalasi: 2019).The Fed Government’s proscription of ‘Shiite Muslims’ or IMN is also popularly believed to have stemmed from ‘intra Islamic hatred and bigotry’. These two groups have never been linked with force of arms or violence including killings and destructions. In opposite, they have lost over 1,800 lives in the hands of murderous coercive state actors; with over 1500 others maimed and incapacitated. Several have disappeared without traces and scores died in the state captivity.

As a university trained and field criminologist and graduate of security studies, I know as a fact that the major defining factor of a terrorist group or persons lies within the confines of widespread violence and force of arms already in action against the collaterally targeted population and key government facilities. In law and criminology, too, mens rea alone, without actus reus; can never constitute an offense of terrorism or terrorism financing. From every indication, therefore, the Government of Buhari and Osinbajo did not proscribe IPOB and IMN as “terrorist groups” because they are one, the Government only ended up giving them legal, political and moral basis to transform themselves into terrorist organizations, if they so wish, Emeka Umeagbalasi disclosed.

Agents of State terrorism including security chiefs, key ministers and top Presidential aides; among them the President’s media and image handlers are mindlessly using the name of ‘Buhari’ to perpetrate unspeakable regime atrocities in Nigeria. These have further led to perpetration and perpetuation of ‘industrial scale’ rights abuses and violations in the country; perpetrated out of the perpetrators’ own volition and full knowledge, only to mischievously turn around and blame them on “Buhari”; hiding under ‘vicarious liability’.

Joined by a cross section of the media including major actors in the country’s mainstream media; rights and labor activists, lawyers, commentators and writers on national issues; their shift to ‘vicarious liability’, using the name of “Buhari”; instead of ‘individual and bureaucracy liability’ is carefully and mischievously designed to play the role of ‘a saint’ in the end whereby the name “Buhari”, whether dead or still living then, will be apportioned with all the blames in matters of the ongoing unspeakable regime atrocities including state terrorism and repression and ‘industrial scale’ rights abuses and violations.

Granted that circumstances surrounding the name “Buhari” including “personality-identity” and “psycho-physical state” have independently remained sketchy as well as terrible and despicable roles he played in his heydays as Nigeria’s fourth military maximum ruler from Dec 31st 1983 to 27th August 1985; yet these are not enough to ‘cabalize’ his name and use same destructively including turning the country into kingdom of animalism and cannibalism.

Some Judges And Lawyers Are Agents Of State Terrorism In Nigeria

Apart from having the moral burden of ‘not going to the equity with clean hands’, a cross section of judges and lawyers in Nigeria display body languages strongly portraying them as ‘agents of state terrorism and repression’. By allowing the Constitutional provisions and unambiguous others including court orders and pronouncements to be breached or violated or flouted with reckless abandon by coercive state actors, such judges have expressly made themselves ‘agents of state terrorism’. For instance, if a judge allows a detainee who was arrested and detained for over 60 days without administrative bail or proper trial; to be arraigned for trial in his or her court, he/she is nothing short of ‘an enemy of rule of law and agent of state terrorism’.

Such a judge has also impeached the Constitution (1999) by failing to uphold Section 35(4). In the case of flouting of court order (s), no further trial on the issue should be allowed until the court order is obeyed or complied with. Lawyers who deliberately and mischievously lowered the Constitutional provisions and promoted in their arguments and presentations obnoxious statutory provisions such as the constitutionally incoherent Section 27 of the Terrorism Prevention Act of 2011 as amended, for purpose of same taking prominence over Constitutional provisions; a fragrant breach of Sections 1(3) and 315 of the 1999 Constitution as amended; are also ‘agents of state terrorism and repression in Nigeria’.

Some Media, Activists & Lawyers Are Playing The Ethno-Religious Card In Aid Of State Terrorism

Human rights in the world over are indivisible, non-discriminatory and indissoluble. As a matter of fact, a rights abuse somewhere is rights violation everywhere. But in Nigeria, the reverse is the case. Ethnicity and religion play a key negative role in campaigning for citizens’ rights particularly when violated or in a verge of violation. This has extended to defense of democracy and rule of law in the country, now interpreted along ethno-religious lines. While skeletal attention including skewed and little mainstream media coverage and human rights campaigns is given to certain citizens of the country on account of their ethno-religious backgrounds or affiliations, others receive maximum and consistent media and rights advocacy attentions and sympathies.

A clear case in point was the recent ordeals befallen Citizen Omoyele Sowore (Yoruba) and Barr Ifeanyi Ejiofor (Igbo). Both are victims of state terrorism, but with differing degrees of state atrocities. Barr Ejiofor, a mourner who just buried his Reverend elder brother, was visited in his mourning enclave with unspeakable quantum of state atrocities including burning of his entire six family houses and 14 others within his neighborhood. His multi million naira worth of house-hold properties and his neighbors’ provision stores, numbering ten, were also burnt to ashes; likewise killing of his aged mother’s domestic livestock and no fewer than four defenseless Igbo citizens. As if these were not enough, the same state perpetrators turned around and declared him wanted, accusing him of burning his own family houses and properties.

The Board of Intersociety has resolved to adopt the duo of Barr Ifeanyi Ejiofor and Comrade Omoyele Sowore as the threatened and state terror victims of the year 2019. In adopting them, extant laws in Nigeria and principles of the rule of law as well as the seven elements of crime, particularly actus reus and mens rea and the universally established definition of “a criminal”, etc were extensively or exhaustibly considered.

Owing to the fact that ‘status of a criminal’ (i.e. terrorist or treasonable felon) is not established by mere state suspicion (unproven mens rea) or suspicion based on tribal or religious origin or political/professional opinion(s); in addition to total absence of actus reus; Intersociety concludes and holds that the threatened victims are nothing short of victims of state persecution, being persecuted by the Nigerian State. They have never advocated for and involved in armed resistance in Nigeria or any part thereof.

In conventional criminal investigation in the world over, too, you don’t ‘arrest and detain before alleging and investigating’, rather, you ‘suspect, allege, seen and investigate before you arrest, detain and continue investigation, Umeagbalasi concluded