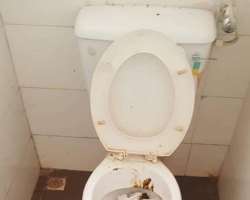 This may adversely affect the health of the children especially the female students who are prone to infections as a result of unkept and dirty toilet.

Inspite of the state of the earth facilities and infrastructures government has built in the school, it was shocking that the principal whose name our correspondent could not confirm, could leave the convenience to go this bad, putting students at high risk of contacting diseases.

Our correspondent who was undercover on fact finding mission to the school gathered that the principal has barely resumed towards the end of the last term when the school was preparing for its third term examination.

It was also learnt that she has about two years to her retirement, as it was said that "she is soly after making money for her retirement as obviously that is the only reason a principal will refuse to pump water for kids to flush the toilet after usage.

"Am sure the non-teaching staffs will not see water to wash these toilets due to lack of water", an activist, Mr. Victor Ojei, alleged.

He noted that the attitude of the principal is a bad way to represent the vision and mission of state government, "This is a total disgrace and it is unacceptable", Ojei, roared.

It was alleged that the principal collects N300 for examination paper as some top government functionaries have been allegedly indicted in the fees saga.

"We need to save these kids and other kids in other schools in Delta State with such conditions", the activist added.