Orji Uzor Kalu's Seat Will Not Be Declared Vacant - Senate 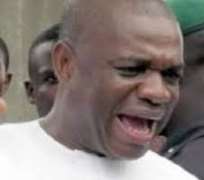 The Senate on Friday ruled out the possibility of declaring vacant, the seat of its Chief Whip, Senator Orji Kalu, following his conviction by a Federal High Court in Lagos on Thursday.

Kalu, a former governor of Abia State, was sentenced to 12 years’ imprisonment over a N7.1bn fraud charges against him since 2007 by the Economic and Financial Crimes Commission.

The judgment was delivered by Justice Mohammed Idris, 12 years after the EFCC filed the suit against him.

Kalu was convicted alongside his firm, Slok Nigeria Limited, and Jones Udeogu, who served under him as the director of finance and account at the Abia State Government House in Umuahia.

Reacting to the calls on the leadership of the Senate to declare his seat vacant, the Spokesperson for the red chamber, Senator Godiya Akwashiki, said it was not possible.

He said such a request would only be considered after the embattled senator had explored all the legal options available to him without success.

Akwashiki argued that the constitution of Nigeria does not mandate the Senate President to unilaterally declare the seat of any senator facing prosecution or convicted by a lower court, vacant.

He said, “The Senate has no reason to declare his seat vacant. This is not the first time that such a thing would happen.

“There is no provision in the constitution that says the seat of any senator facing prosecution or convicted at a lower court should be declared vacant.

“He still has the opportunity to appeal the case.

“Even the tenure of a former governor Joshua Dariye, who has been in prison for some time now, ran its course until the end of the 8th National Assembly. Nobody declared his seat vacant.

“The Senate President cannot declare the seat of Kalu vacant. It is against the law.

“Tell those who are canvassing such things that there is nothing like that, it is a non-issue,” the Senate spokesperson added.

On whether Kalu will continue to receive salaries while in prison, Akwashiki said the National Assembly bureaucracy determines the payment of senators based on the template from the Revenue Mobilisation and Fiscal Allocation Commission.

He therefore directed our correspondent to liaise with the management of the federal parliament for its decision on the issue.

Attempts to speak with the Clerk of the National Assembly, Mohammed Sani- Omolori, through the Director of Information, Mr. Rawlings Agada, failed on Friday.

Repeated calls made to his mobile phone did not connect while he had yet to reply the text message sent to him as of the time of filing this report.