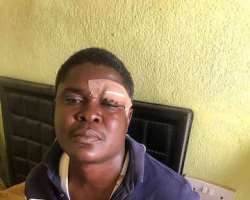 Some students of Zappa Secondary School in the capital of Delta State, have launched attack on a male teacher after allegedly soaked in hard drugs fermented in a water container.

Trouble started Friday when the students who have finished their first term examination laid seige on the teacher on his way home, leaving him with injury on his forehead.

An activist, Mr. Victor Ojei, who posted the incident on his Wong Box Facebook page, decried the level drugs have caused in the state among secondary students.

Hear him: "Hard drugs now being consumed by secondary school students in Delta State, these kids now take all forms of hard drugs and get intoxicated to start fighting their teachers, the man in photo with forehead injury that was later stitched at federal medical centre Asaba, Delta State was attacked by one of his student and got injured.

"Each time the principal calls for help to curb or contain these children who have gone wild due to hard drugs they will have to pay minimum of N15,000 else no support will come.

"The Governor of Delta State needs to know that in 5 to 10 years time, crime rate will increase and there will be no peace if the state government fails to follow my advise or solution.

"These kids needs to be lectured on integrity and the need to avoid joining various cult groups.

"Delta State does not have punishment for cultist in the constitution. CAN YOU IMAGINE THIS ? someone deleted it before they signed it at Delta State House of Assembly.

"Parents should be cautioned by state government not to go to schools to threaten teachers who engage in corrective measures when they default. This act by parents give children mental morality to disrespect their teachers.

"State government C.I.Es also should stop the act of inviting teachers and cross examine them along side parents (mostly from Sub-Urban settlement), this act makes teachers to look at the other side when these kids go wrong".

Meanwhile, it was gathered that the mastermind, had mental challenges two years ago and had been expelled from the school after the attack on the teacher.

Efforts to reach the state Commissioner of Basic and Secondary Education, Chief Patrick Ukah, proved abortive as his cellphone was switched off which also scuttled our ability to get the names of the students and the teacher.

Contacted, the Commissioner of Police in the state, Mr. Adeleke Adeyinka, said: "I don't know of any attack".