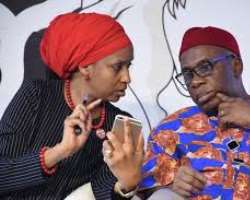 Persons suspected to be hoodlums have launched separate physical attacks against the Minister of Transportation, Rotimi Amaechi and the Managing Director of Nigerian Ports Authority (NPA), Hadiza Bala Usman.

Amaechi said he was on a climate change summit in Spain when some violent Nigerians charged at him.

“Some minutes ago, I was attacked by a few misguided Nigerians while on national assignment at a climate change event in Madrid, Spain. They were quickly repelled by the Spanish police before they could do any harm. I am fine. I was not hurt. Thanks for your support & prayers,” Amaechi said on Twitter Friday evening.

The Indigenous People of Biafra (IPOB) has claimed responsibility for the attack.

“It is not a personal problem against him. It is a standing order against all of them and we are looking for all of them. It is based on the standing order given by our leader, Mazi Nnamdi Kanu, to IPOB, Spain, to beat the Minister of Transport, Chibuike Amaechi,” he said.

He said it was the order that led to a similar attack on former Deputy Senate President, Ike Ekweremadu was mugged while attending an event in Germany a few weeks ago.

“IPOB is warming all those corrupt politicians who brought hardship to the people that we are waiting for them anywhere we meet. We will continue. We are telling the whole world why they must be dealt with because they are not sincere to the people to the suffering citizens,” Powerful added.

Meanwhile, the Managing Director of Nigerian Ports Authority (NPA), Hadiza Bala Usman, has petitioned President of the Senate, Dr. Ahmad Lawan, over alleged unruly behaviour of some suspected hoodlums, who physical attacked her at the National Assembly premises on Tuesday.

In a three-page petition dated December 4 and titled “Petition Against Unruly Behaviour, Physical Attack and Threat in the NASS Chambers by hoodlums sponsored by Wells Okunboh of Messrs Ocean Maritime Solutions Limited (OMSL),” Usman said she was ambushed at the exit door after attending an investigative hearing on the activities of OMSL and other security agencies at the Safe Anchorage area in Lagos at the Senate building on Tuesday, December 3.

According to her, “As I walk out of the meeting room, I was ambushed at the exit door by hoodlums shouting and pushing their way toward me trying to gain close access to my person to physically attack me raining curses at me that I was taking food away from them and their boss, Captain Okunbo, that they will find me and destroy me, that I will never get away with this act.”

The NPA boss further stated that it took the intervention of her security agents and others around her which starved off her being assaulted “and had to push me back into the meeting room where I was ushered away to Senator Danjuma Goje’s office where I waited hoping for the hoodlums to disperse Usman”.

She, therefore, expressed concern that she could be openly attacked by suspected hoodlums within the precincts of the National Assembly.

“To think that hoodlums will be sponsored by people and allowed access to National Assembly premises to intimidate and humiliate government officials who have been invited by virtue of their offices as representatives of the federal government for me is the height of impunity and disrespect,” she stated.

She, therefore, requested the Senate president to carry out a thorough investigation of the incident so that the culprits could be made to face the full wrath of the law.

This, she further submitted, would not only be punitive “but serve as a deterrent to anyone to be at their best decorum within the revered premises of the National Assembly.”

OMSL faults Usman
OMSL has, however, debunked any knowledge or involvement in the attack on Usman.

OMSL spokesman, Commodore Chuma Adogu (rtd), said the NPA Managing Director’s allegation was a falsehood and a figment of her imagination.