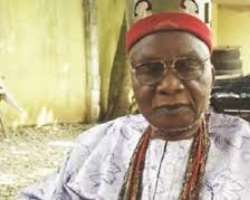 The family of His Royal Highness, King Isreal Okwu Kanu has dismissed a death rumour making the rounds that Eze Kanu, father of Nnamdi Kanu had passed away following the death of his wife, Mrs Sally Okwu Kanu,

Eze Isreal is the father of the leader of the Indigenous Peoples of Biafra(IPOB), Nnamdi Kanu.

This came following widespread rumours in many quarters that Eze Israel Kanu had died as a result of the shock he suffered over his wife’s demise.

According to Emmanuel Kanu, “For avoidance of doubt, anyone who wishes to have an audience with the king can visit the Palace”.

Reacting to the development, the IPOB leader, Nnamdi Kanu, was quoted in the media as saying that the fake news about his father’s death was aimed at distracting and sabotaging the Biafran restoration.

Kanu, therefore, vowed that no amount of distraction will stop the Biafran restoration.

He said his mother died on 30th August in Germany after doctors were unable to cure her of a protracted illness and accused the federal government of contributing to her death.