Umahi bans use of fireworks in Ebonyi. 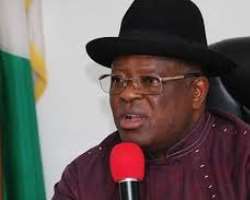 Ebonyi state Governor, Chief David Umahi has banned the use of fireworks popularly known as Knockout in the state, especially in this yuletide period.

The ban was as a result of the rumour making the round, that there was a bomb explosion at Glory Land secondary school, Azugwu, in Ebonyi LGA of the state.

The Governor gave the order in Abakaliki while addressing newsmen warned that anyone caught in possession of knockout will be arrested.

Speaking through his Special Assistant on Media, Mr Francis Nweze, the Governor said he was shocked when he received the information on the alleged bomb explosion and directed that investigation be carried out.

According to him: "when his Excellency received the message about alleged bomb expulsion in one of the secondary schools in the state, he was shocked. And he gave immediate directive for further investigation about that.

"It was later found out that it was a mere knockout. As a result of this, his Excellency has banned the use of knockout in the state, especially in this festive period. He gave the directive this afternoon. And that is the stand of the governor for now.

"when the governor gives a directive, it is expected that the general public should obey it, if they don't, any person caught will face the full wrath of the law and the government disciplinary committee" he stated.

Meanwhile, the Commissioner for internal security and boarder peace, Mr. Stanley Okoro Emegha, had earlier in a chat with journalists vowed to closedown all shops selling knockout in the state.

He equally dismissed the rumour making the round, that there was bomb expulsion in the said secondary school.

According to him: "We showed a proactive response towards the incident yesterday. This is because we will not allow the governor to do everything.

"The way the incident was blown is unfortunate. There was nothing and absolutely nothing like bomb expulsion incident in that Glory Land school, Azugwu.

"There was nothing like explosive device in that place. You know that this is a Christmas period, that thing was a Christmas fireworks.

"A student smuggled one into the class room while others were taking their exams and he was playing with it. And in the process, one exploded and got him wounded. Some of the students were not expecting such and the shock got them down.

"I was called immediately and on getting there, I met with the affected student. I was there when he was rushed to hospital. The two others who got shocked later regained consciousness and continued with their exams.

"Students, continued with their exams after the whole thing. It was not up to 30 minutes, normalcy returned to the school.