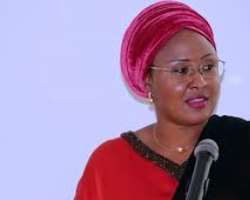 The wife of the president, Mrs. Aisha Buhari is not a woman afraid of speaking truth to those in power including her spouse. Time was when she lambasted President Muhammadu Buhari, claiming that some cabal had hijacked power and swore not to vote for her husband. Those who wished the president ill were clapping their hands. Such people failed to realize that Aisha Buhari is a two edged-sword that can swing either way.

Last week, the muse of truth came out again from this First Lady of Nigeria. This time the subject of rebuke were the state governors who are more enamored with collecting security votes and getting a retinue of idle aides in the name of governance and spreading democratic dividends. Addressing the National Executive Council meeting of the National Supreme Council for Islamic affairs in Abuja, she lamented the absence of leadership at the state level and the inability of state governors to provide basic services like water. She lamented : `People cannot afford potable water in this country while we have governors. We should either fasten our seat belt or do the needful or we will all regret it very soon because, at the rate things are going , things are getting completely out of hand`. Nothing could be more apt and compelling than the observation of the First Lady. There is simply absence of leadership at the state level and even worse at the local council level.

It is rather unfortunate that instead of the governors to face the challenge and mint out way of providing responsive and responsible governance, they are saying that the message of Buhari was meant for all leaders. This is how Abduulrazaquo Bello Barkindo, Head of Media , the Nigeria Governors` Forum puts it :`That the nation`s religious leaders have to be told by none other the First Lady, Mrs Aisha Buhari, that things are getting out hand , is an indictment not just of governors, but of the nation`s entire political elite`. The response of Barkindo is not only blowing the wind but also trying to defend the indefensible.

Year in, year out, state governors present budgets to their houses of assembly, the impact of which are hardly felt by the masses, the owners of electoral sovereignty. As you read this piece, state governors are pretending to be smart by half by their insincere dialogue with labour leaders over the thirty thousand Naira minimum wage. How can this be defended? I stand to be corrected of any state government that provides potable water to the public. Rather some advisers are telling their governors to tax individuals for sinking boreholes in their compounds.

It is only a visitor from outer space that would say that things are not getting out of hand. Unemployment rate is sky bound, criminality is the order of the day, yet we are told that the primary duty of governance is the security and welfare of the people. Our governors are just disappointment. The state legislators are rubber stamps and are treated as an arm of the executive. It is true that the federal government is not doing better but if state governors could perform half of their statutory functions, there will be less problems in this country. Politics in Nigeria remains the primitive accumulation of wealth for self, family, friends and cronies. The moment a Nigerian assumes position of authority and influence, he deludes himself that he is a god and should be worshipped.

My dear First Lady, I thank you for your candour, and history and posterity should judge you rightly. You have already distinguished yourself as a woman who speaks truth to people and even the gods. Our uncaring and indifferent governors are supported by traditional rulers who are more of contractors and are in the same league of not caring whether their compatriots go to bed hungry. Development and progress shall continue to elude the nation as long as the plagues of uncaring and indifferent governors bestride the political space. I may be wrong but I share the same sentiments with the spouse of the president. I rest my case.